One Chilly Weekend in Rochester, NY

2017-02-22 – 26: I flew up from LAX to Rochester, New York (with a layover in Baltimore since Rochester’s airport is pretty small) in February 2017 for a good long weekend – Wednesday through Sunday. The biggest reason was to visit my good friend Lauren (who, a year later, would visit me in LA), but I also wanted to meet my friend Sam, and I was also looking for any excuse to get out of the house and go somewhere new.

Note – this is a somewhat older post, from before I kept a detailed journal, so this whole weekend will go by somewhat quickly in my tales below.

I brought a couple disposable cameras and you can see all the photos I took with them over here in this post on my photo journal. I’ll use a couple from there in this post too, but there are plenty more in that post.

My flight got in pretty late on the 22nd. I got ripped off by a “cab driver” who really was just a guy with a van and a phone number… I thought Rochester would have taxis or lyfts or at least something, but I was unprepared and paid the price for it with a ride that cost at least 4x what it should’ve. Oh well.

I got into my Airbnb after the host had gone to sleep, but found my way through the dark house to the top floor, a cozy bedroom in the front of the house, in which I promptly fell asleep. 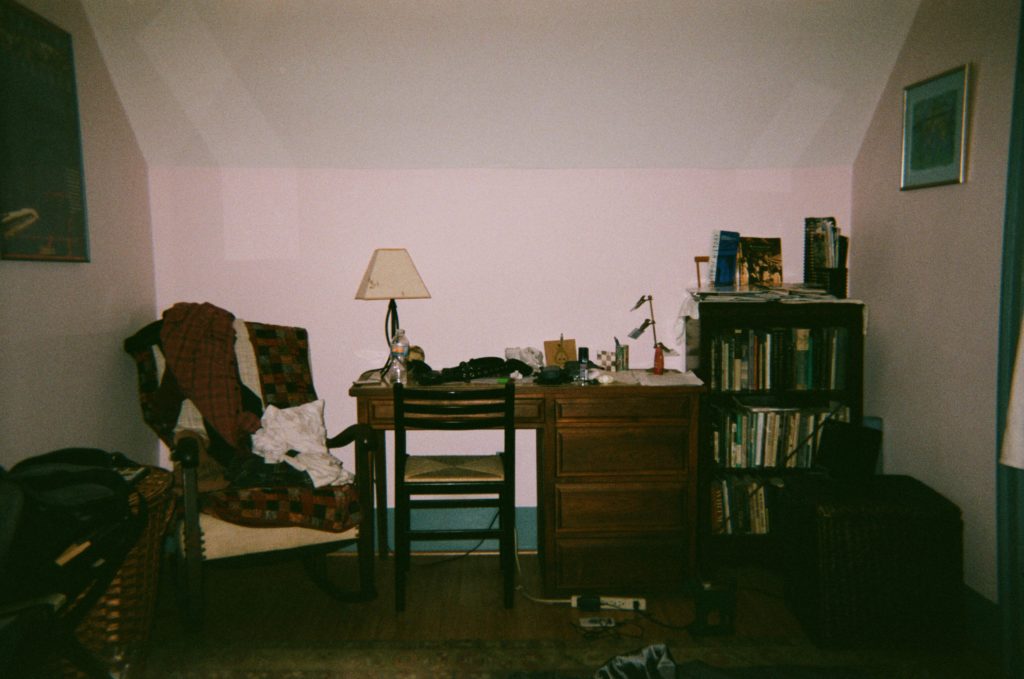 I met my Airbnb host on Thursday morning, a lovely woman who just had some extra space and enjoyed showing guests around town. She had some great recommendations. But I couldn’t talk long, because Lauren picked me up bright and early.

Lauren is a conservation specialist at RIT – the Rochester Institute of Technology – which is such a cool job, and something that she’s perfect for. I got to see her corner of the conservation lab and she gave me a tour of the library and other areas. Then she started working and I got to explore.

Maybe this is weird, but I love walking around college campuses and just hanging out. There was a coffee shop on campus that I relaxed at for a while, then I started walking around and seeing the architecture of the institute. It was surprisingly very interesting. 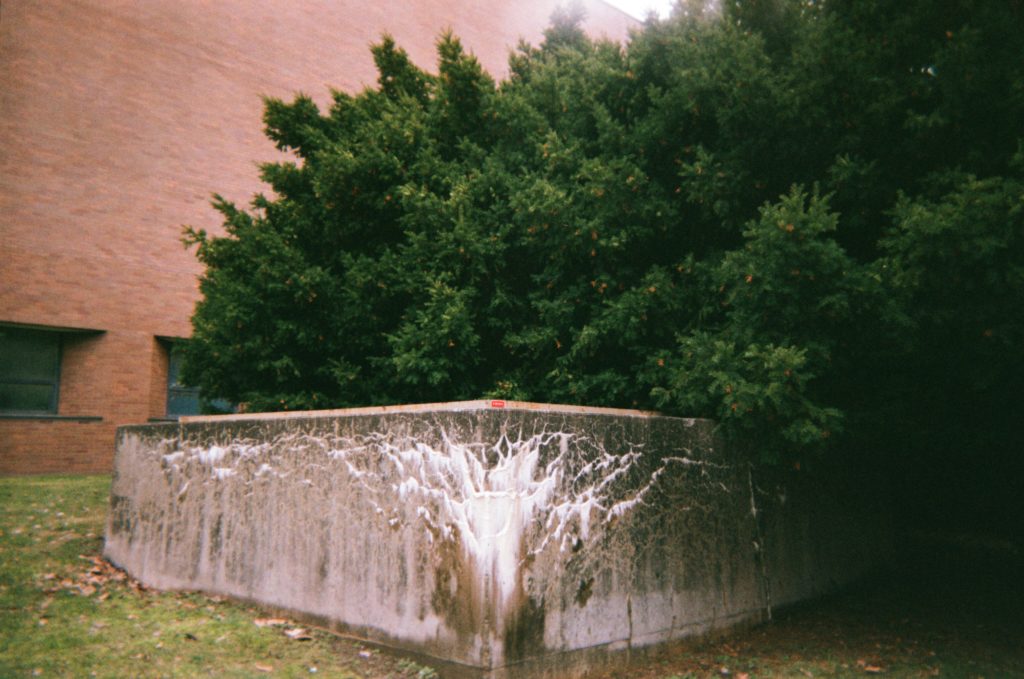 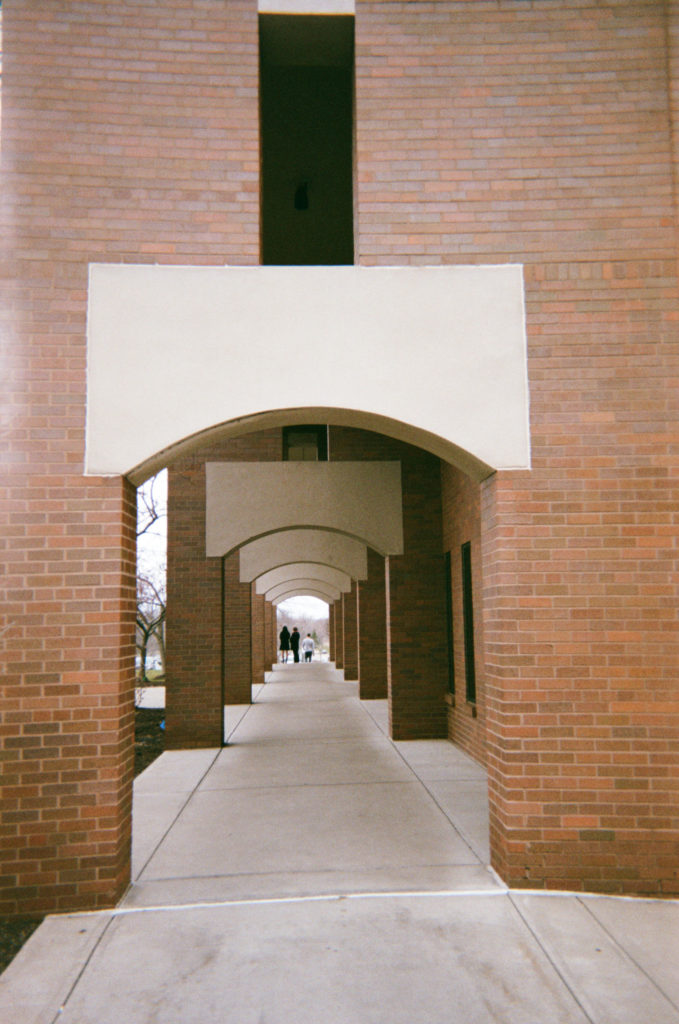 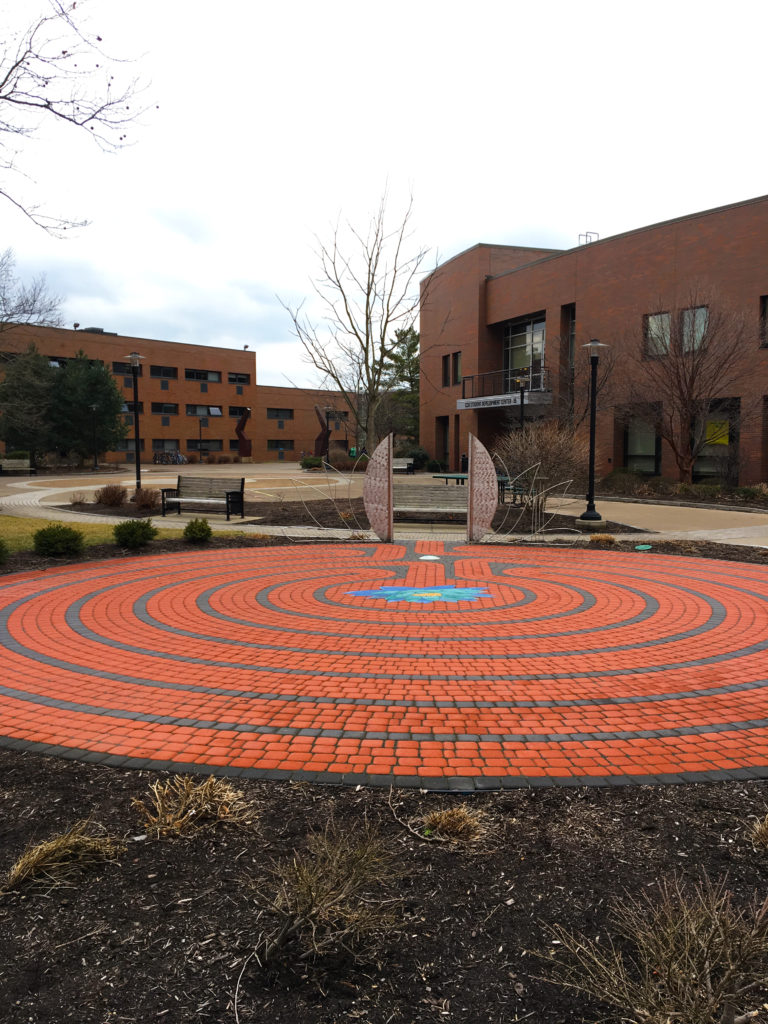 I was lucky that it wasn’t freezing out, just very chilly, but there was still snow here and there. I wasn’t sure what to expect, since this was my first time in upstate New York (and actually my first time in New York ever, though I’d visit NYC the following year), but I was prepared with plenty of layers. 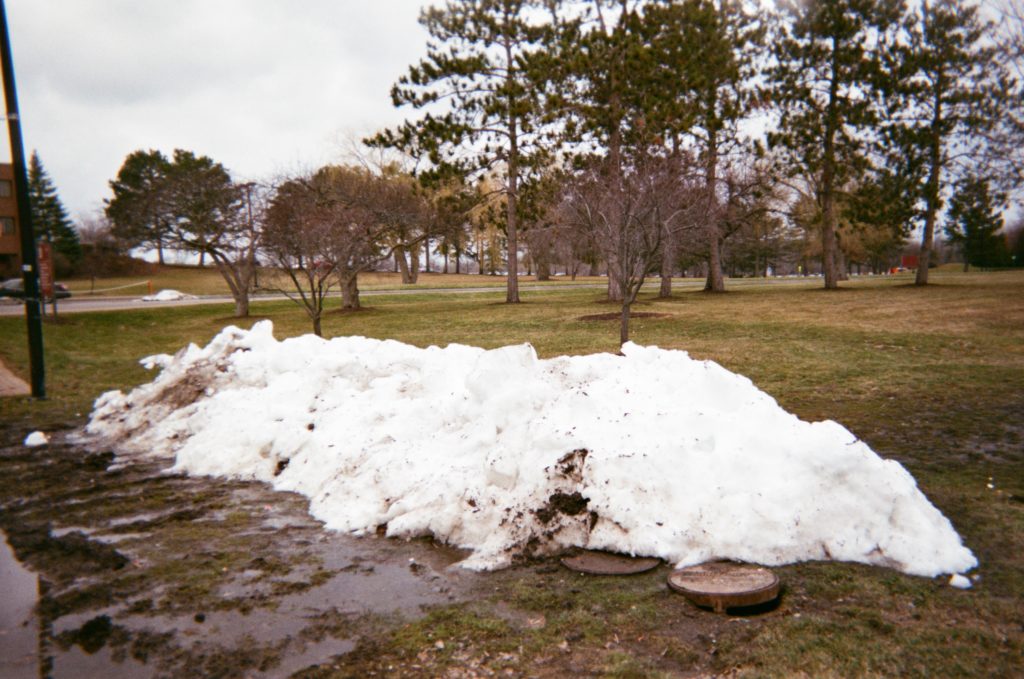 The campus also sat right next to a lot of woods and fields. This was magical to me, I walked on a ton of these paths. The melting snow had turned this area into an amazing landscape. It was either a marsh or a swamp, I’m not sure which – but definitely not a bog or a fen, because:

Marshes are nutrient-rich wetlands that support a variety of reeds and grasses, while swamps are defined by their ability to support woody plants and trees. Bogs are characterized by their poor soil and high peat content, while fens have less peat and more plant life than a bog. – KnowledgeNuts

Anyway, check out this marshy swampy forest that so enchanted me. 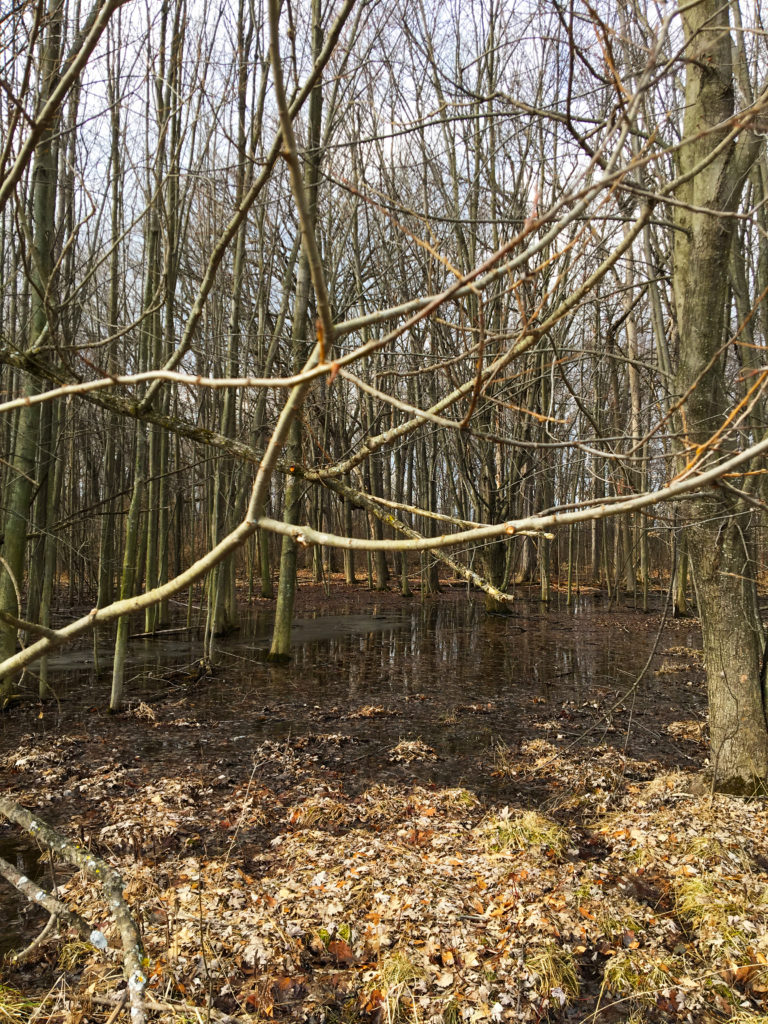 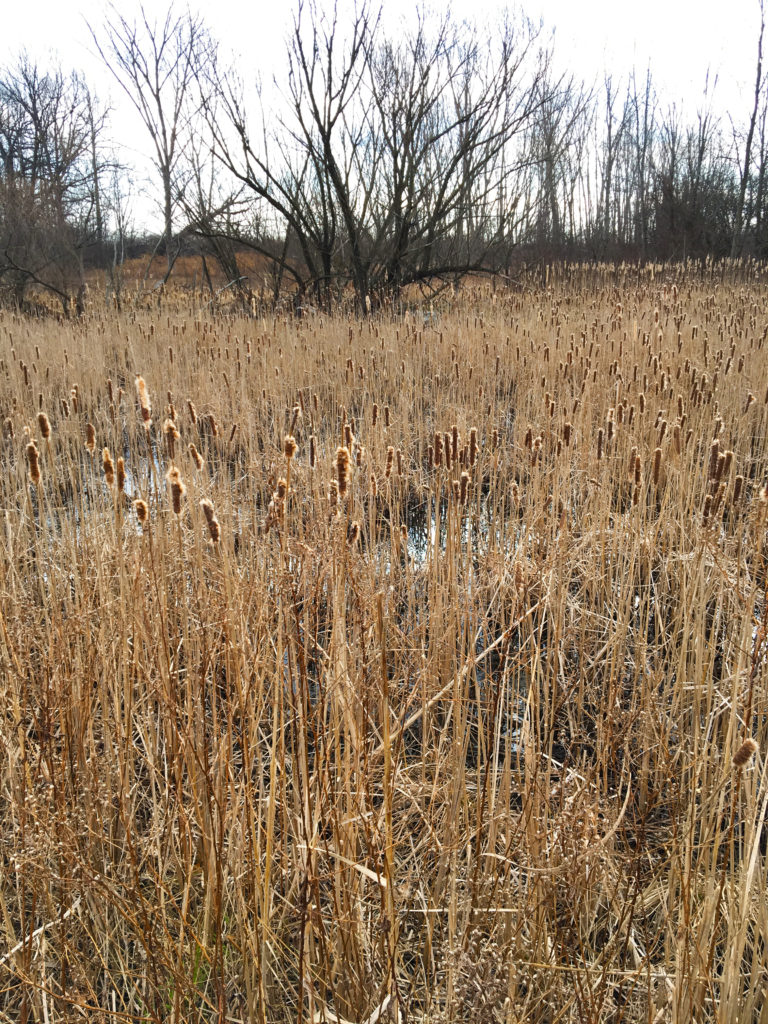 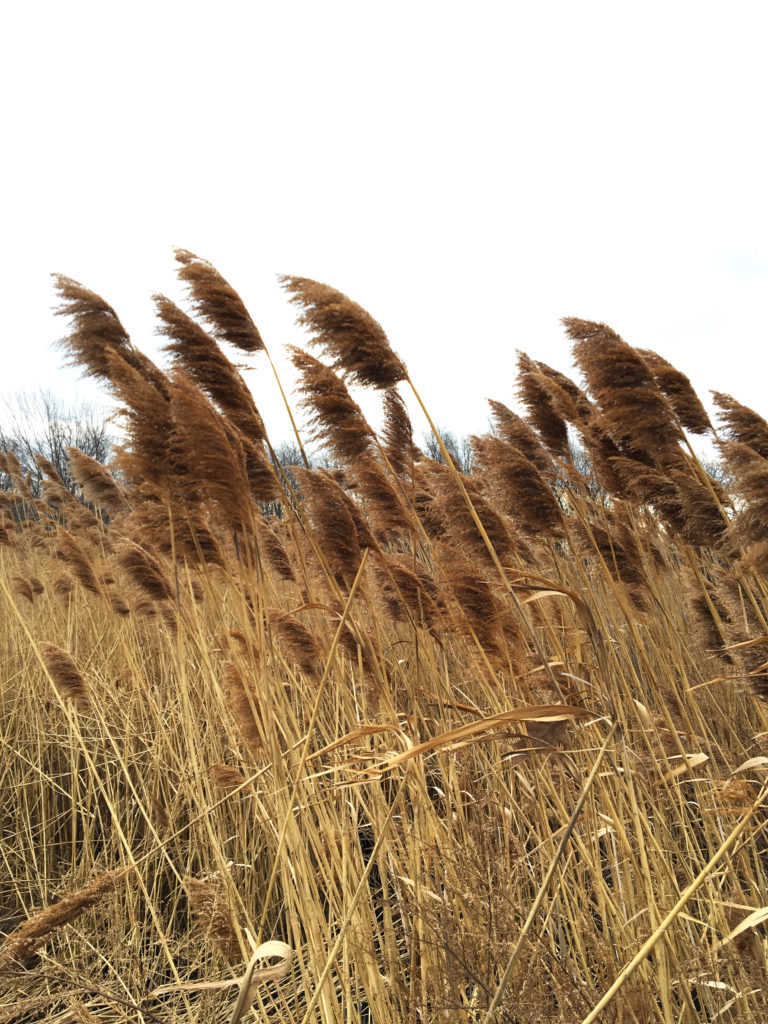 Wow – I am in love with these landscapes! It took so much effort to not just start walking in some direction and keep going forever. Had it not been so chilly, and maybe if I had been wearing galoshes, I probably would have. Next time.

I met Lauren for lunch, and then I continued to explore a while inside the buildings. Saw this weird thing: 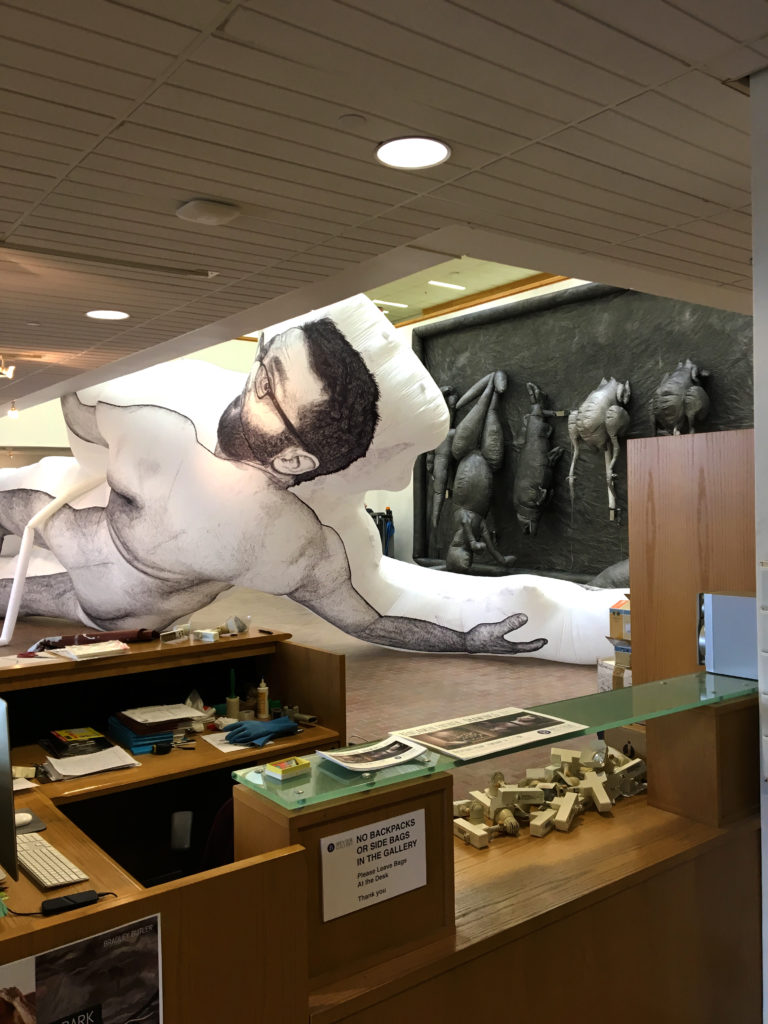 …no idea what’s going on there.

Eventually I met up with Lauren again at her office:

and rode with her back into town.

I don’t remember where dinner was that night, but I’ll never forget the fishbowl sundae. 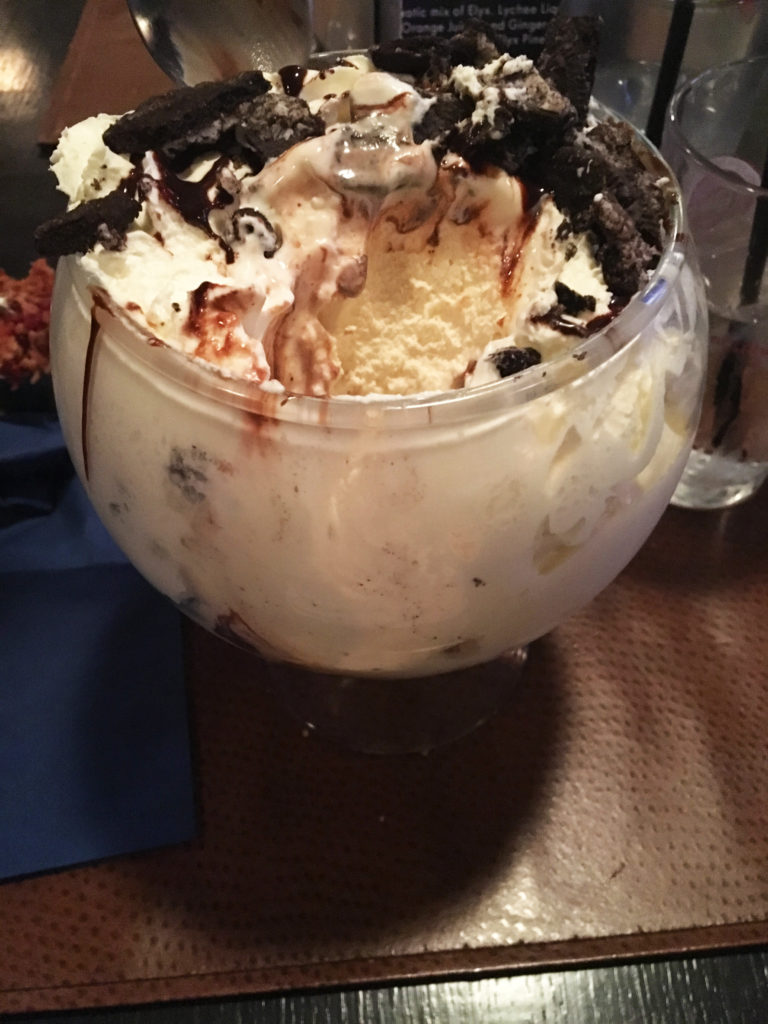 An actual fishbowl. Damn. I was in disbelief when they put that thing in front of me. I tried my best to finish it but sadly my stomach stopped me from eating the last fourth or so. The rest of the night was spent wishing I had stopped a little sooner.

On Friday I got another ride to RIT with Lauren, but today I was there expressly to meet with my friend Sam, who was a student at RIT. Sam is an extremely talented metalworker and ugh I just love her style and aesthetic, and she’s a fellow cat-lover too. She’s such a cool person.

We hung out at RIT for a while, and then at her dorm-like place nearby for a while where I marveled at her almost complete lack of furniture, and then back at RIT. When it comes to cameras, Sam is like a ghost. 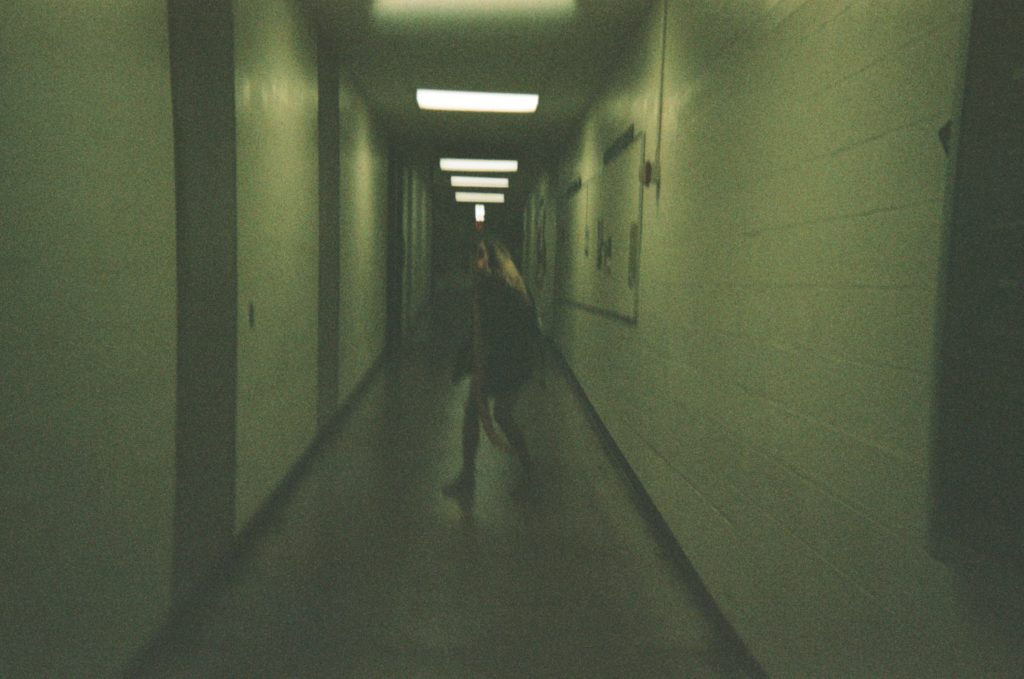 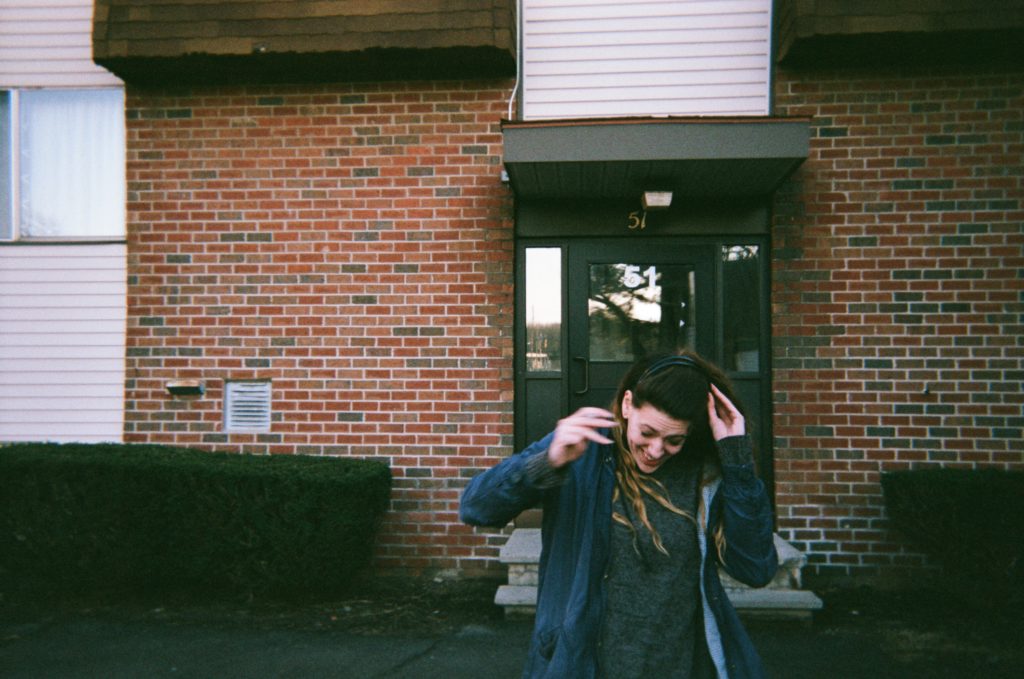 I did manage to get this one as proof that we met… well, kind of proof. 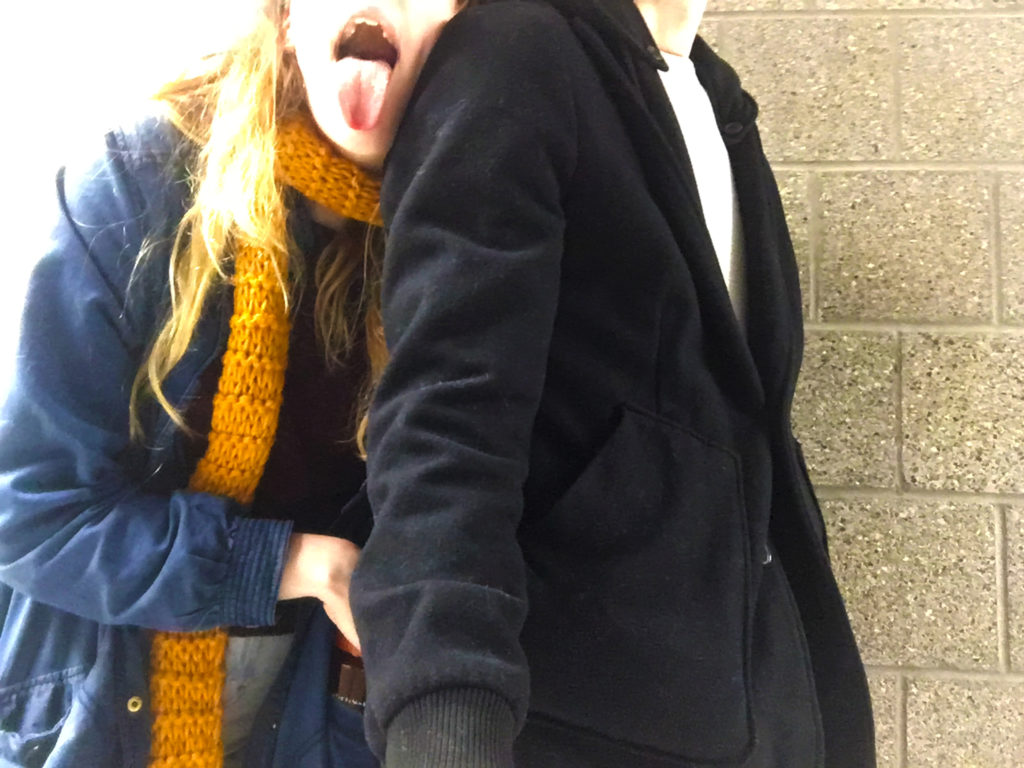 Later I was able to talk to my Airbnb host a little more too. She introduced me to her adorable dog, named Rumpole, who wasn’t able to use his hind legs very well but didn’t let that stop him from getting around the house. Rumpole was an absolute treasure. 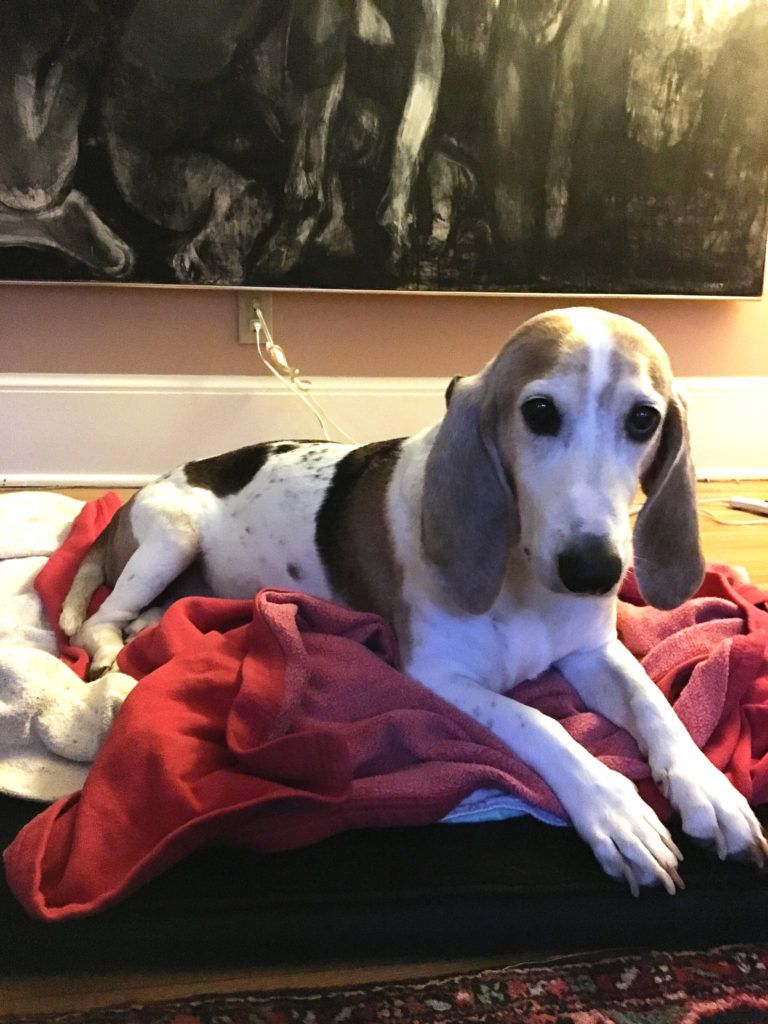 You can see here the view from my Airbnb bedroom, too, which struck me as charming and cozy compared to Los Angeles. 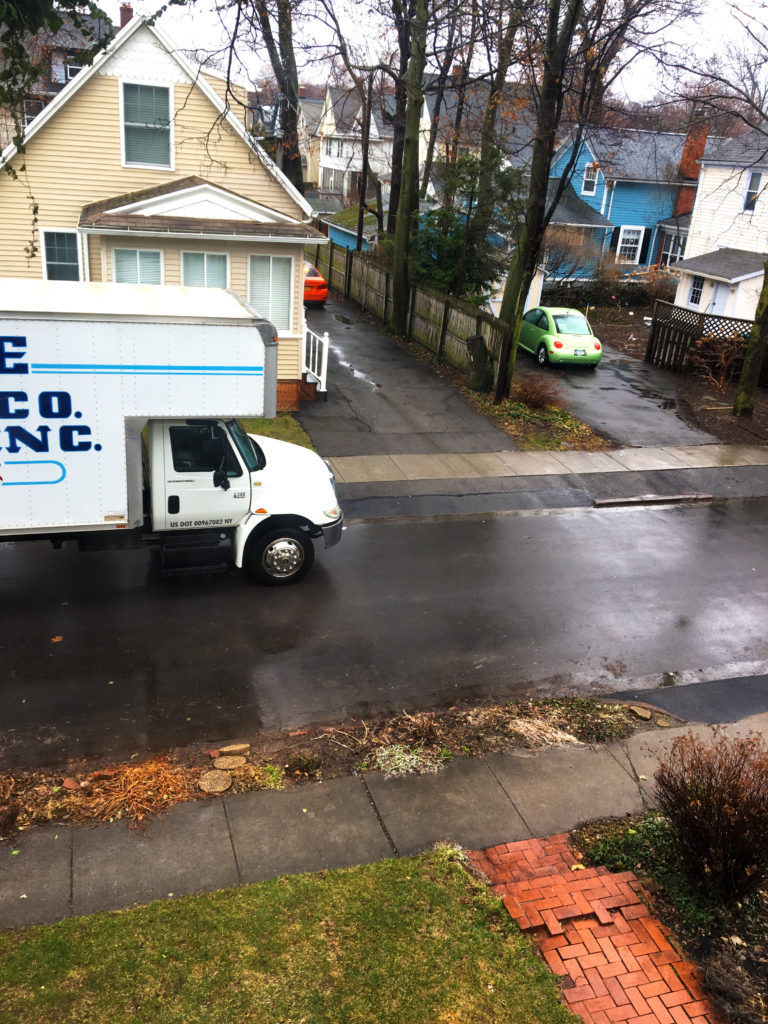 Saturday was the best day in Rochester. Lauren took me to the George Eastman Museum just a few blocks from where I was staying. George Eastman being part of the famous Eastman-Kodak company, of course.

It was part historic mansion, part camera museum, part art gallery, and part conservation grad school, and it’s where Lauren went after she had finished studying at Columbia where we met.

I took about a million photos here but I picked just a few to show in this post. This place was fabulous and I really want to go back.

There’s this big wall full of old chemicals that Lauren helped put together (and that’s her, in a gorgeous lolita outfit, kneeling in front of it): 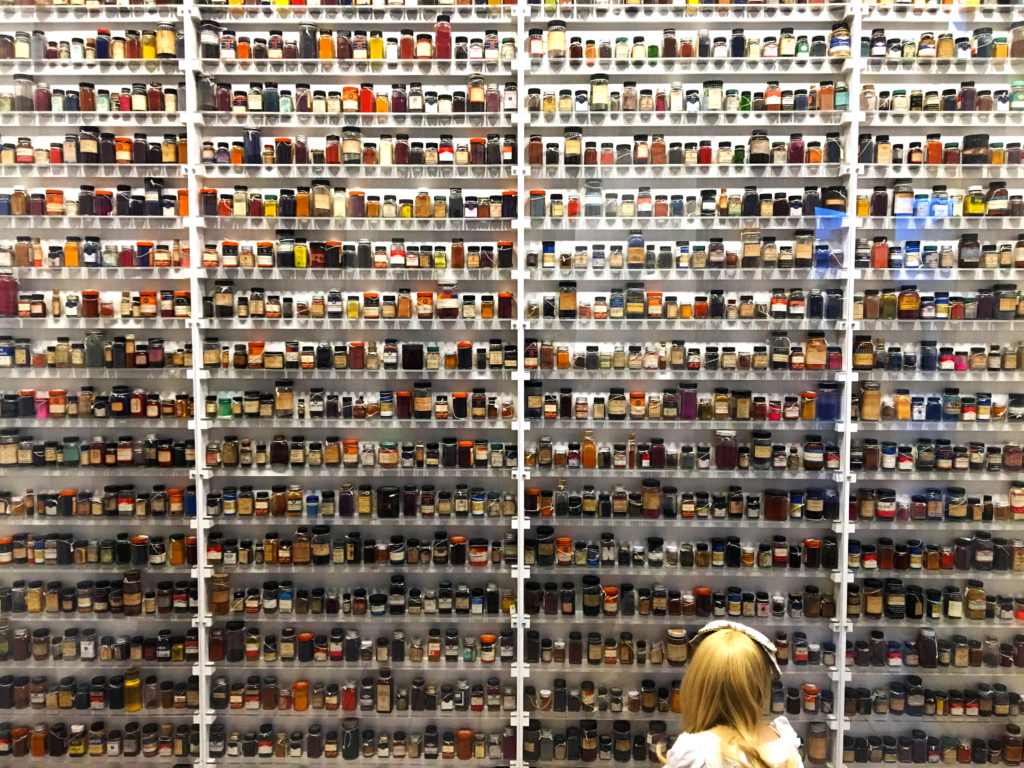 We saw all kinds of photography, from modern to contemporary, and tons of historic stuff too (which was the most fascinating to me): 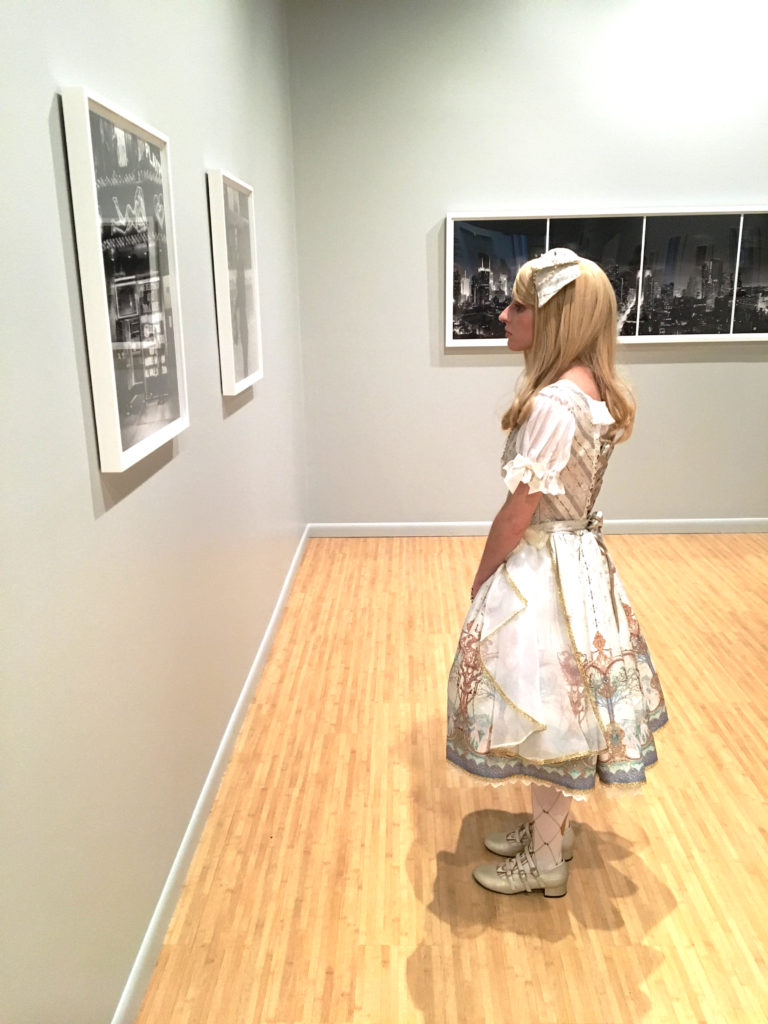 The camera museum had all sorts of amazing things, especially for a guy like me who collects antique cameras (like every other basic former film student). The best part was this lunar camera. There were 8 built, and 5 went on one-way missions to photograph the surface of the moon back in 1967 to select landing sites for the eventual moon landing. These were super-high-tech at the time and are still impressive today.

And then in the mansion they have these big flower gardens that made for wonderful photo opportunities. I got some better photos of Lauren’s lolita coord in full here, she’s also wearing nice shoes and matching leggings, but I like this pic the best even though it doesn’t show them. 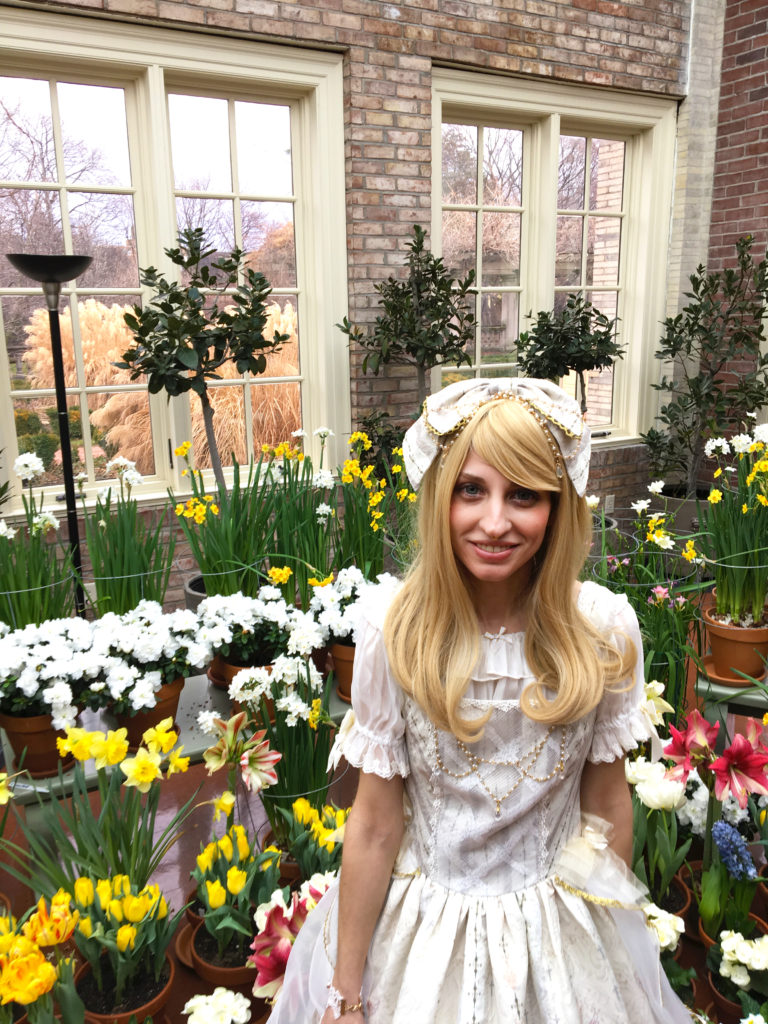 Seeing this museum and mansion was one of the coolest things I’ve done. It was phenomenal. Can’t wait to go back.

After the museum, we met some of Lauren’s friends in nearby Pittsford, which was a less depressing place than the name suggests. We went to Simply Crepes and, sure enough, got some simply delicious crepes.

Later that night we played some darts at a bar and all did pretty badly.

Sunday was my last day, but my flight was later on, so Lauren and I met for coffee at a great place called Cafe Sasso. This place had all kinds of cool art on the walls. It could’ve felt cluttered had it not all been so interesting. 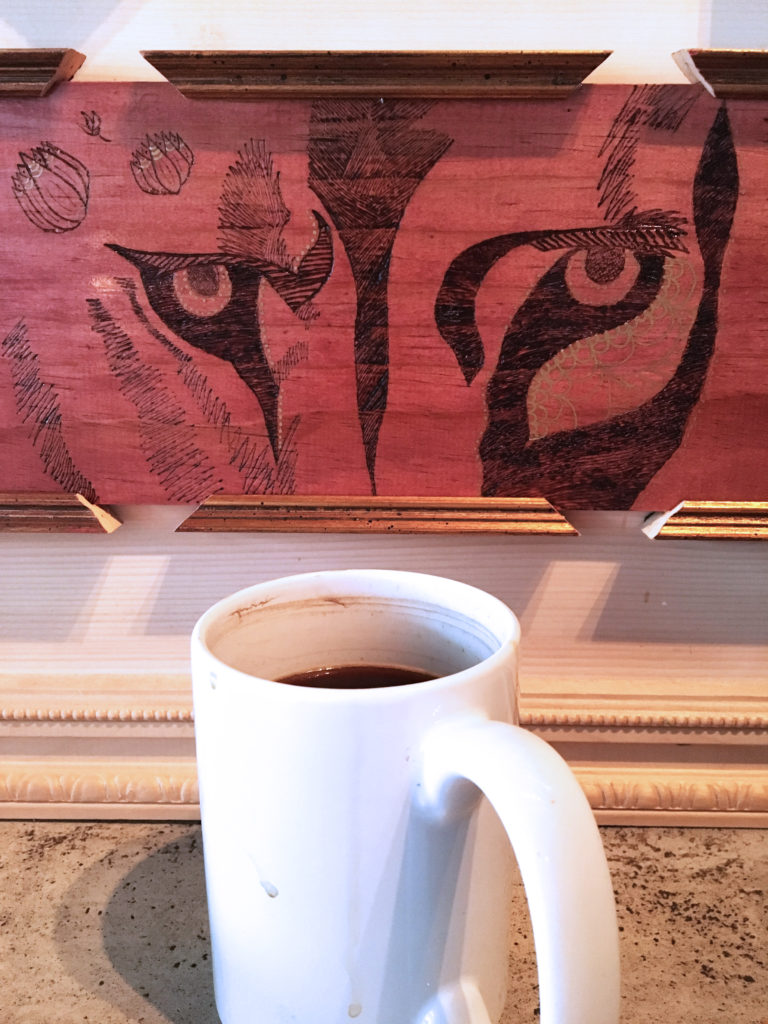 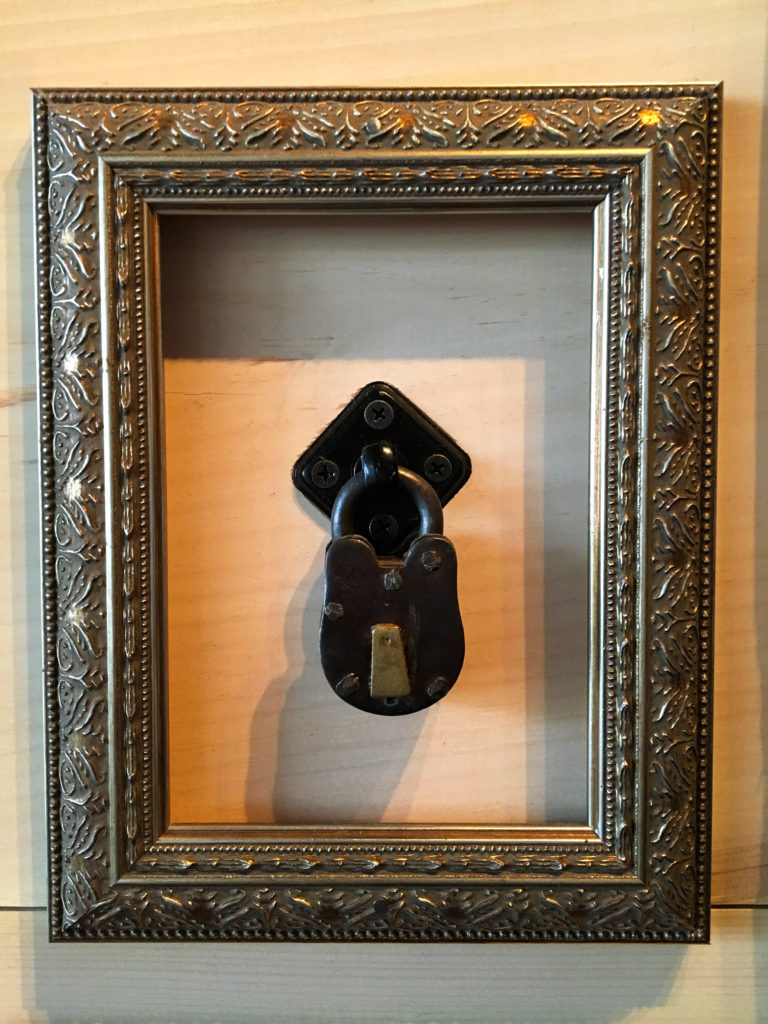 We crashed at Lauren’s place for a while and caught up more today than we had time for the last few days. The museum was cool, but actually, probably, catching up with Lauren was the real highlight of the trip for me. I also got to see her cat Callie again – when Lauren and I lived together in 2012-2013 Callie was a bit of a hellcat but she was much sweeter now.

Finally, it was time to go. Lauren drove me to the airport (no ripoff cabs this time) and we said our goodbyes.

The airport was neat. 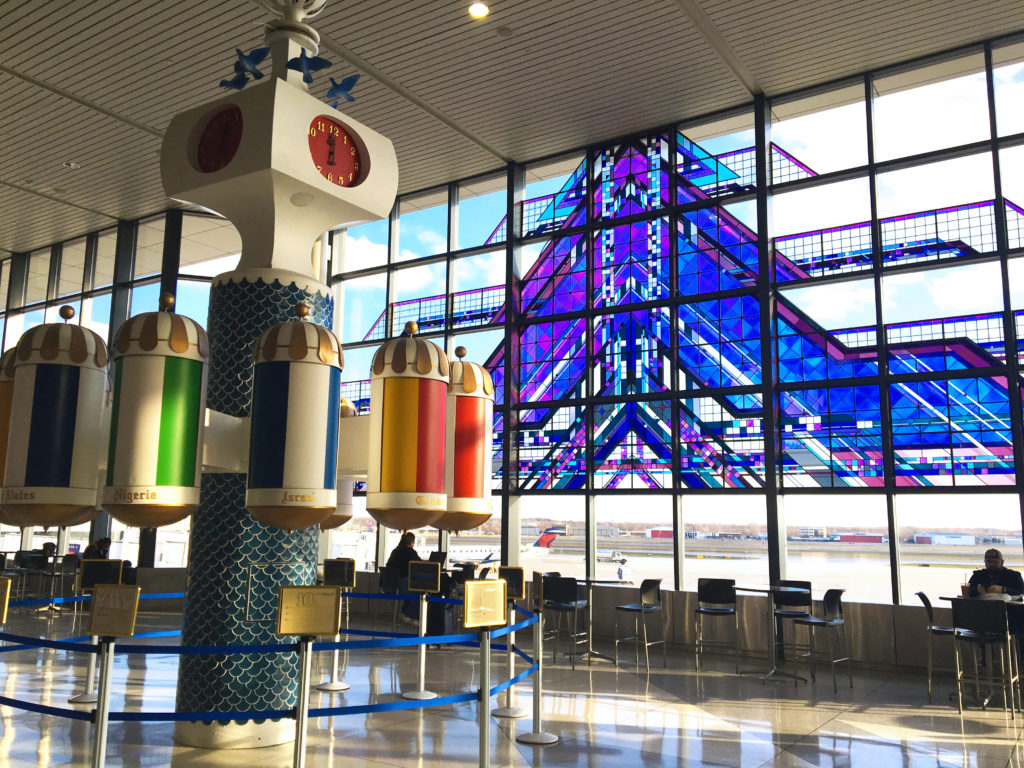 And, lastly, here’s a bonus pic flying over Baltimore, because I really loved how the city looked at night. 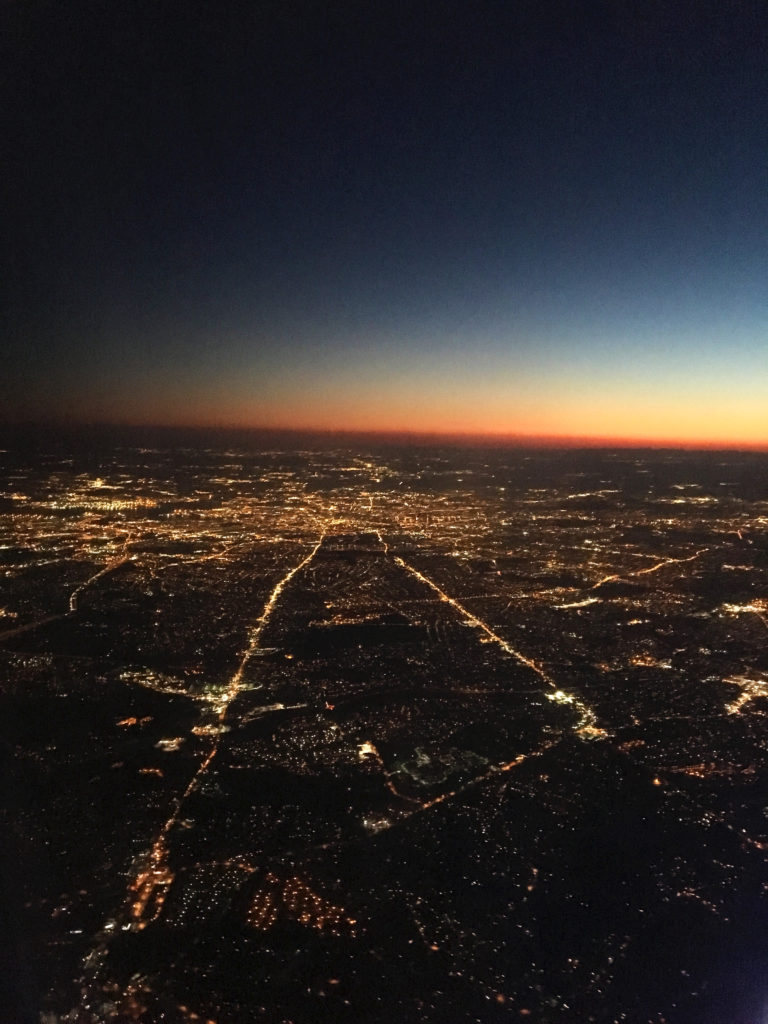 This was a really great trip, one of my all-time favorites. It felt cozy and homey and peaceful in a way that many other vacations don’t. Lauren and Sam had a lot to do with that, as did the chill vibe I got from Rochester start to finish, the misty but not bad weather, and the great Airbnb host (and Rumpole). Rochester surprised me with how nice it was. There’s a lot more there for me to explore. I’ll get back there one of these days – I can’t wait.