Early in the morning, my co-worker Mary picked me up and gave me a ride to a big business meeting we were having with a client in Calabasas, California.

Calabasas is up in the Santa Monica Mountains which were very scenic to drive through. It’s not too far from Malibu, where I was for a mansion tour just a couple months ago.

The meeting was a great success. I spoke to a few slides in front of our client’s executives and, like the whole presentation, it was well-received. I’m on an excellent team that I’m learning a lot from.

We had a delicious lunch afterwards at Ladyface Ale Companie, including some remarkable beer. Ladyface stood out to me because of the art – everything was art nouveau, which is my absolute favorite style. It was a really cool place that I would definitely return to if I’m back in the area sometime.

My co-workers lamented that they all had to leave, despite the surrounding areas looking so beautiful. We were in a scenic valley with lush forests and tall mountains all around us and it was a perfect sunny day. Many of them said they’d like to hike this area sometime, but couldn’t now due to kids, family, etc.

They all left, and I stayed behind at Ladyface.

A half hour later, Alex arrived with a change of clothes for me. (She also gifted me a brand new pair of socks with smiling cups of coffee on them! Perfect gift, and they’d come in handy sooner than I ever could’ve expected.)

After a parking lot change, we drove off to our first destination nearby: King Gillette Ranch.

King Gillette was the guy who invented new varieties of easy-shave razors. He is literally the guy behind the Gillette Razor Company, or at least he was back when he was alive a hundred years ago.

He is not actually a king. His first name is King. I was confused for a while too. “So a king invented some razors and built a ranch outside Los Angeles??” No. Just a name.

The ranch is 588 acres, and the mansion was designed by a famous architect in the 1920s. After King Gillette, it had a weird history – Bob Hope owned it for a while, then it was a seminary, then it was a school, and then it transferred to the National Park Service, the California State Parks Department, the Mountains Recreation and Conservation Authority, and the Santa Monica Mountains Conservatory. Now they run some kinds of classes for kids, potentially some sort of religious services, there’s a little museum there too, and, oh yeah, it’s where they filmed parts of The Biggest Loser, the game show about losing weight.

I doubt King Gillette could have forseen all this when he had the place built.

The mansion itself is actually off-limits to the public unless there’s a special event going on, so we couldn’t get in, which was a shame because it seemed pretty nice. Instead we checked out the small museum nearby. The exterior: 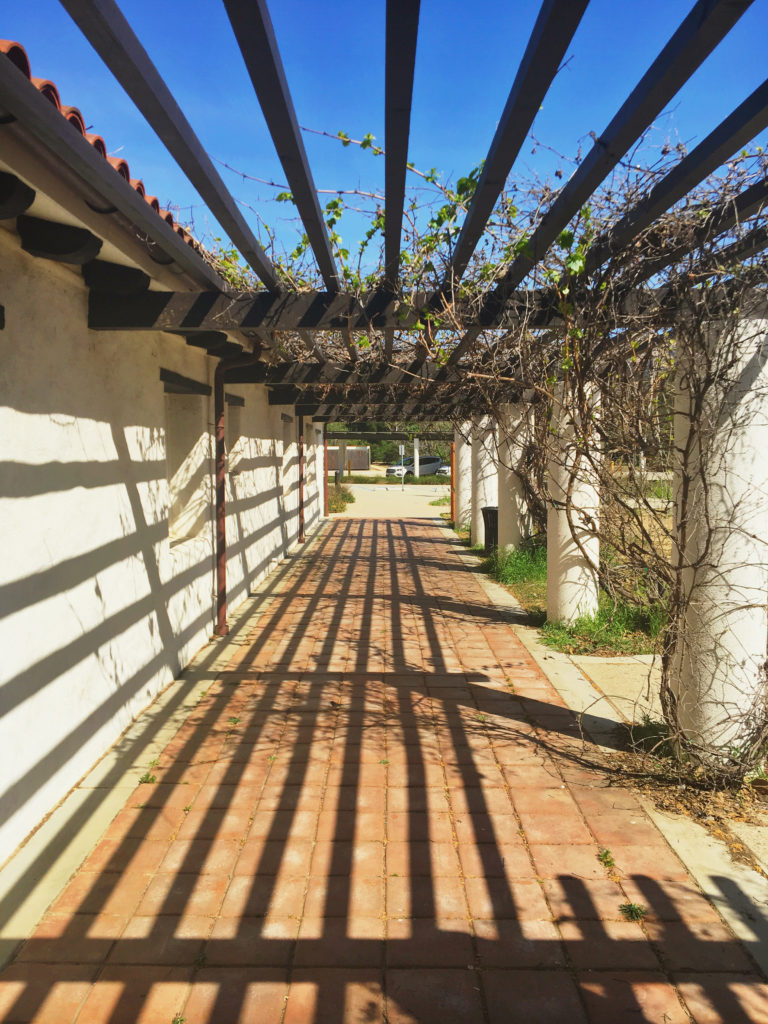 The museum was really more like a hallway with some displays. It was professional and well done, however, and informative about the local land conditions and wildlife.

They also had some kids’ paintings which I found extraordinarily cute:

There were groups of children running around with camp leaders of some sort, and people who looked like staff members and/or churchgoers – we were very confused. It sometimes felt like we were walking onto someone’s home, or into a summer camp. The map of the property had a tenuous-at-best relation to reality.

We walked around in a circle and eventually someone pointed us towards the start of a trail. And thus we began our hike towards the first milestone: Inspiration Point.

The Hike to Inspiration Point

The trail started easy (kids did this part) and the views were incredible. 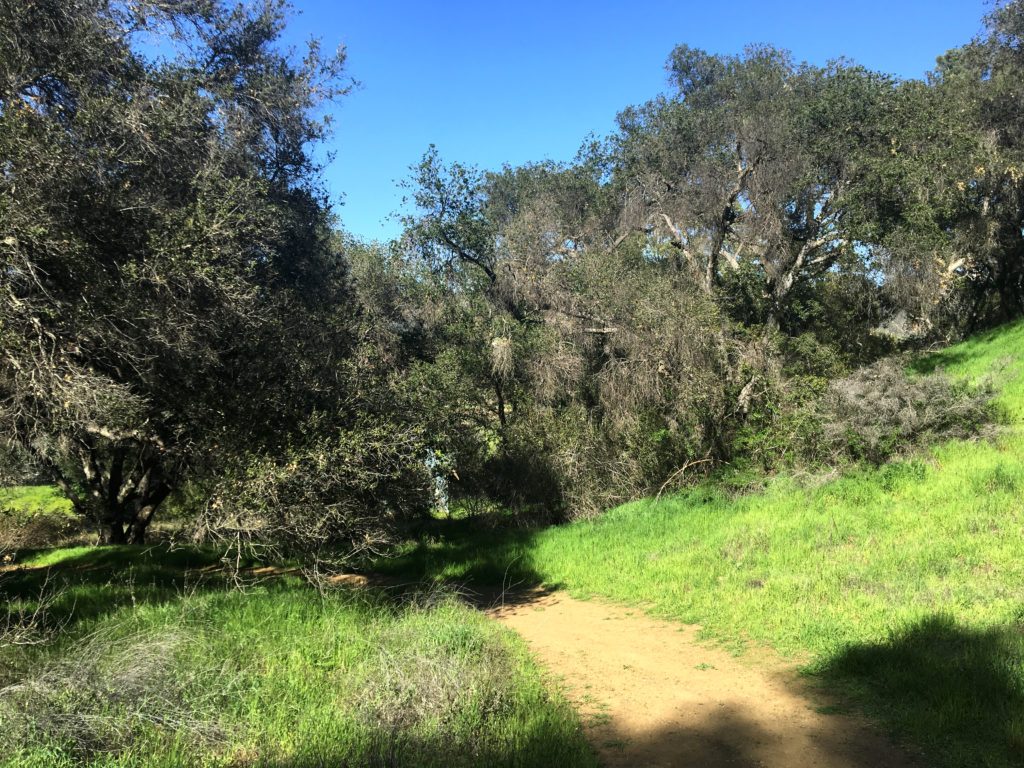 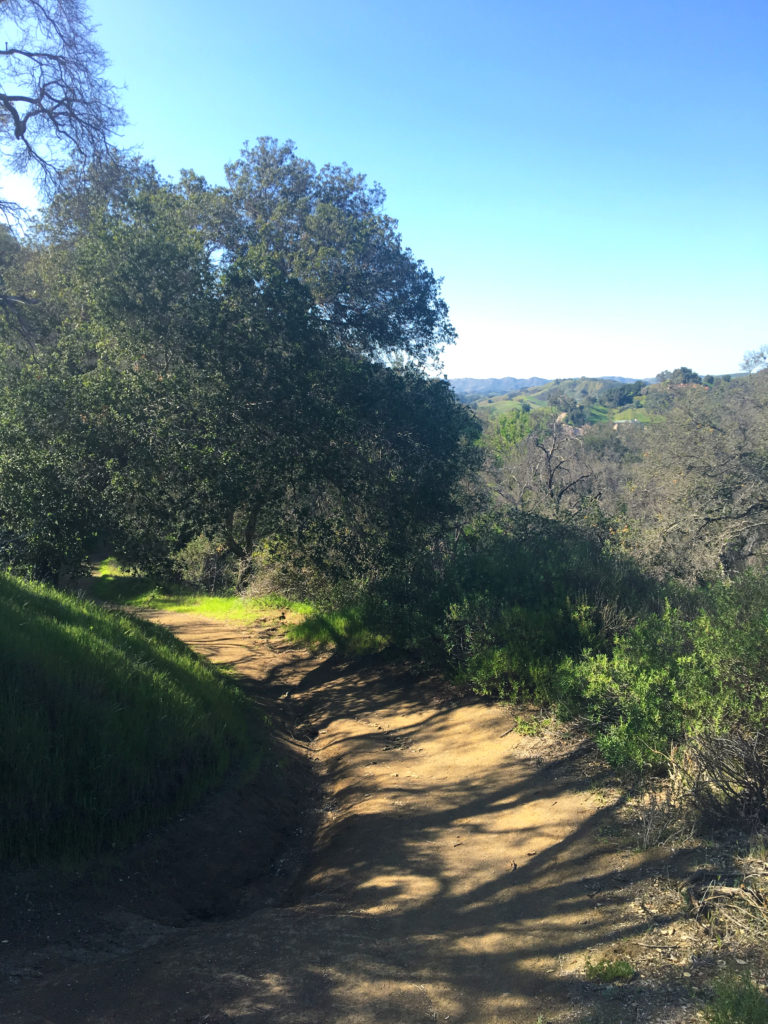 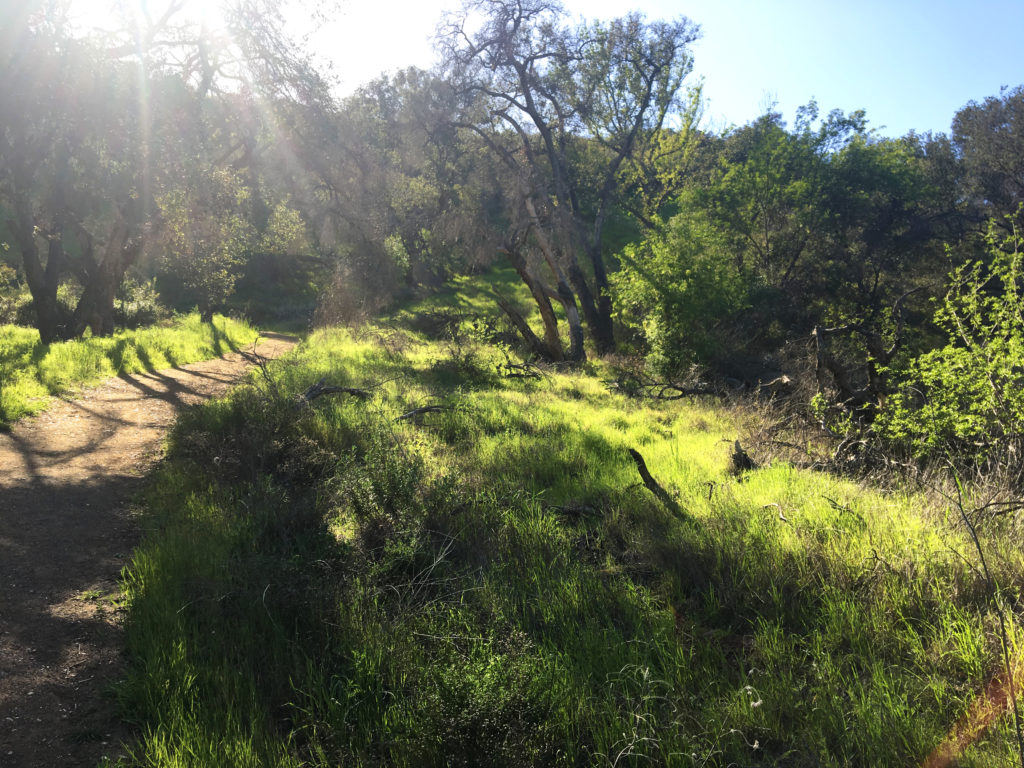 It was such a peaceful, tranquil area. The trees and vegetation here were more prairie-like than a lot of hiking in Southern California is. No palm trees and giant succulents. This almost could’ve been a hike in Wisconsin.

We had a great view down into a wide open valley, backed by forest-covered hills and a couple rocky mountains. 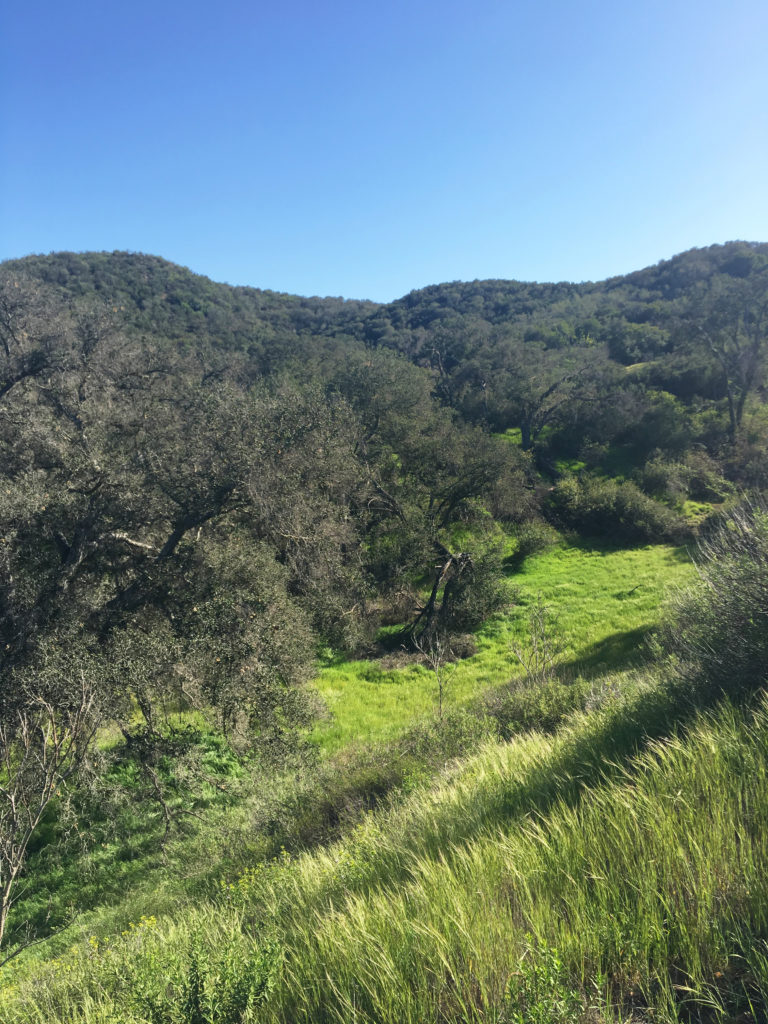 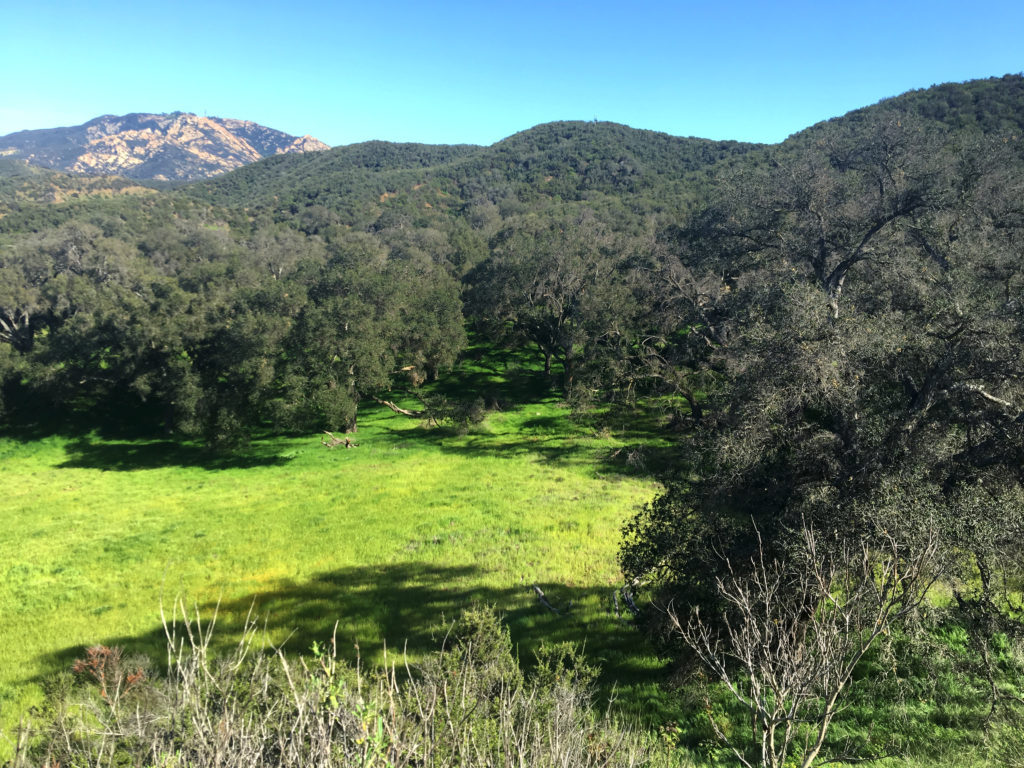 Here’s the thing, though. Inspiration Point wasn’t really clearly marked on the map.

Also not on the map: most of the trails. We walked past forks and intersections that just weren’t recorded anywhere and we were never really sure if we should’ve turned one way or another. This part was easy enough, though, because there was a difference in how worn the main trail was. Still, it wasn’t exactly clear from the map alone.

We met up with a group of kids and a camp leader, and asked them for directions to Inspiration Point, since there were no signs or other markers that would indicate which point was the right one. They pointed at a nearby clearing up a path. However, this also could have been Sophie’s Point, and the one behind them Inspiration Point… again, no idea. So we just did both.

I got this beautiful photo up at Inspiration or Sophie’s Point: 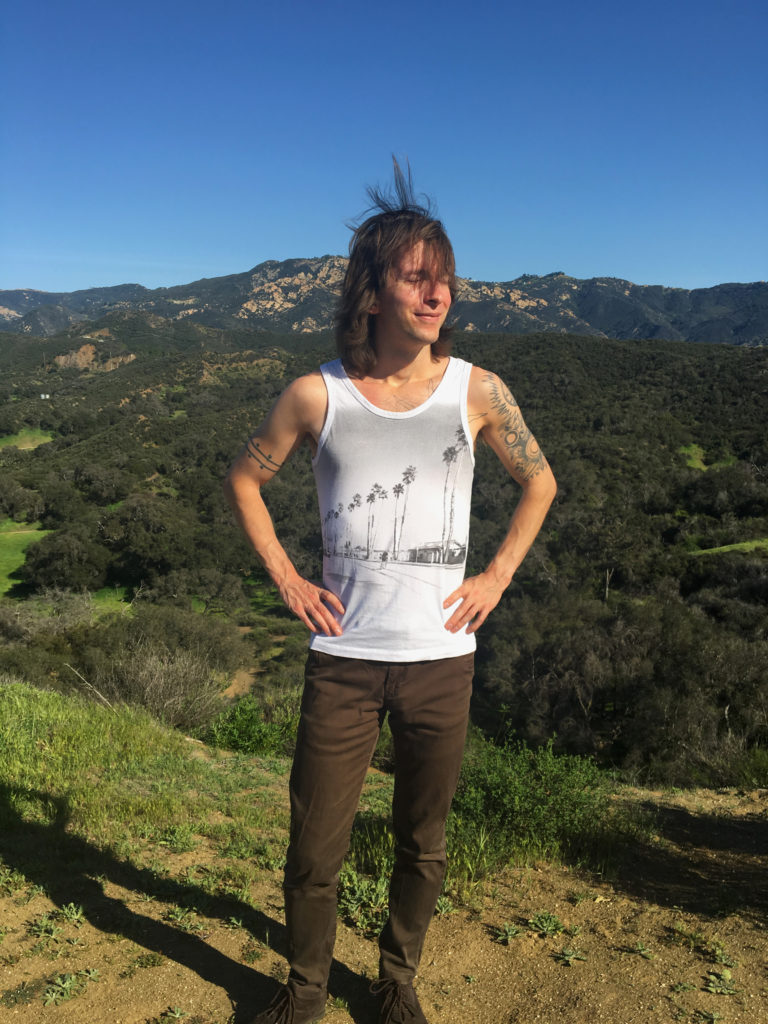 And then I got this similar beautiful photo of Alex: 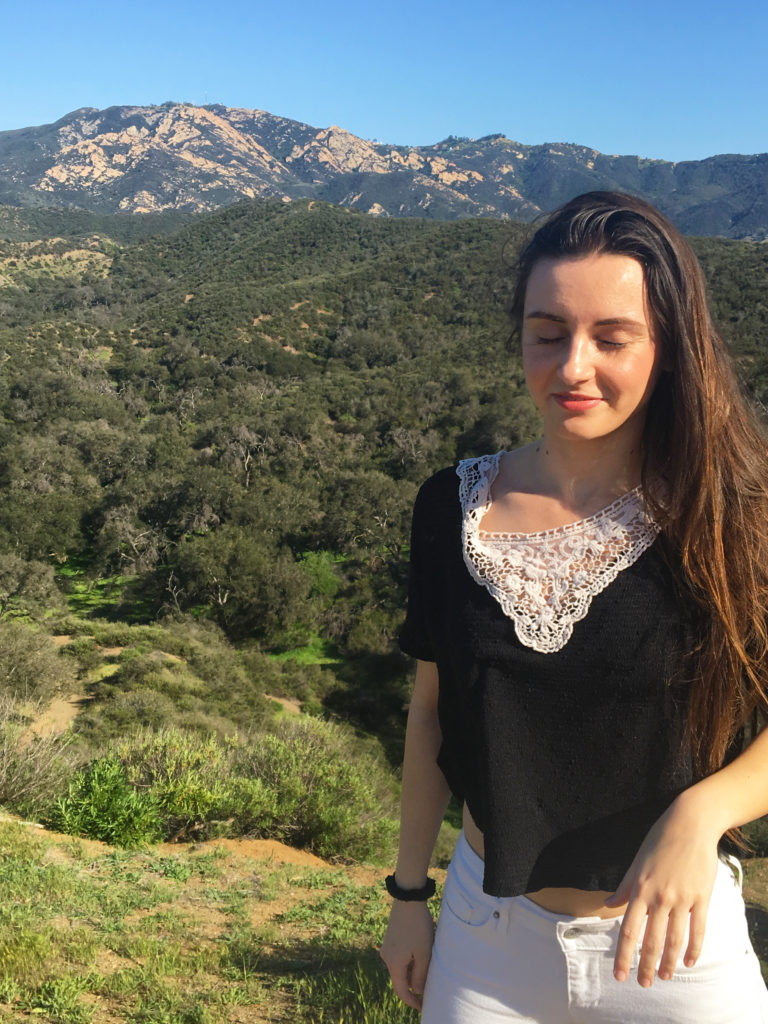 I actually love this photo. But ok, can we get a close-up? 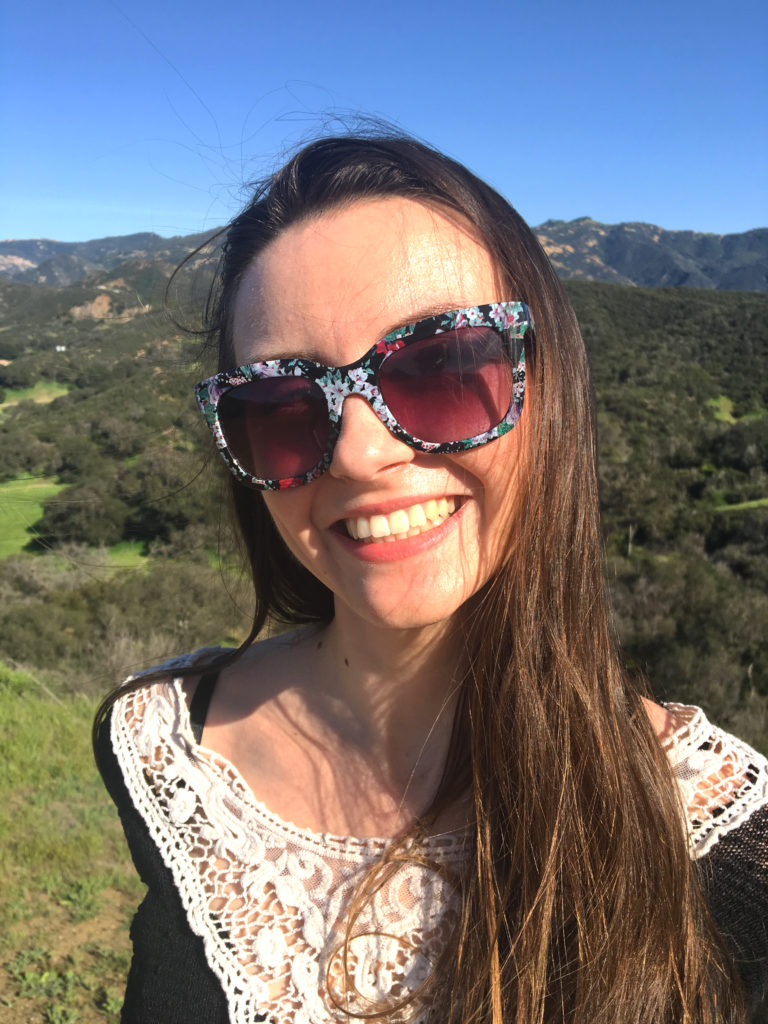 The Inspiration Point (and/or Sophie’s Point) hike was super short and there were all kinds of other trails going further, so of course we kept going. There was a strong attempt to follow the map, but in the end I don’t think it mattered.

The views were still just as beautiful. The trail was a lot less worn and would fade in and out at some points, which I think technically makes part of this a “trek.” 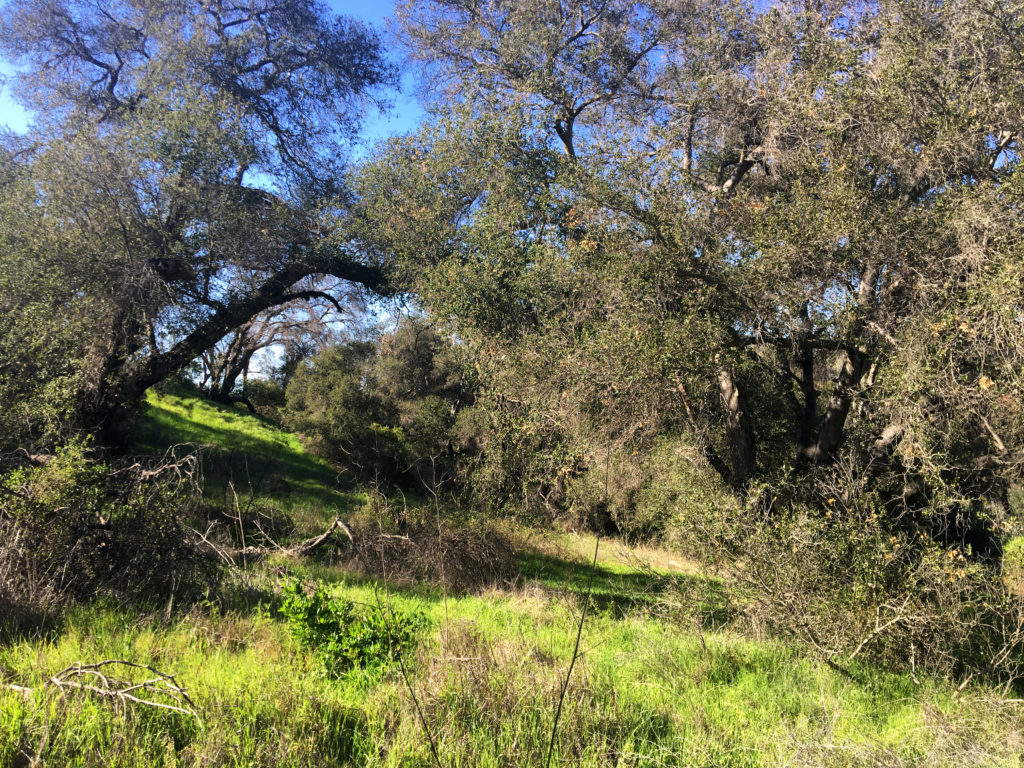 I was again struck by how midwestern a lot of the flora felt. I was especially delighted by the expansive fields of yellow flowers. These are probably some type of fiddlenecks (Amsinckia), which are poisonous to cattle, so not something you’d want on an actual ranch. 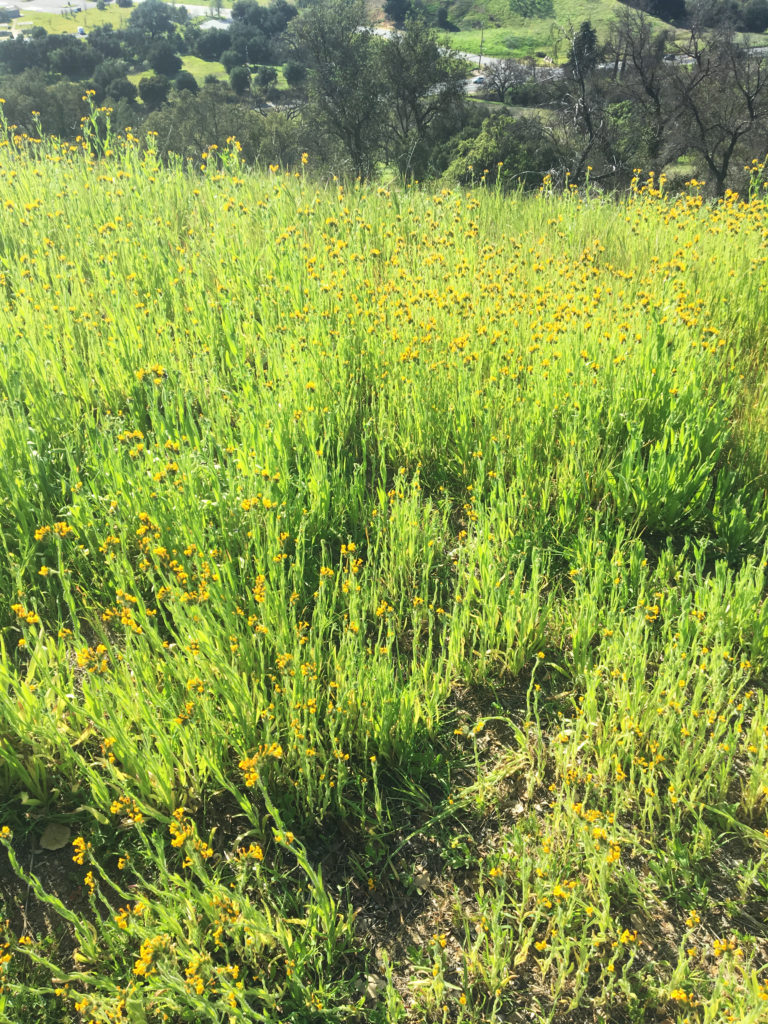 You can see in the background there some of the ranch from above. The ranch was in semi-constant view at first, but eventually we began to see less and less of it as we wandered further off.

Oh, but speaking of yellow flowers, there were also these beautiful pink/purple flowers! Some type of phlox, which are great for butterflies. 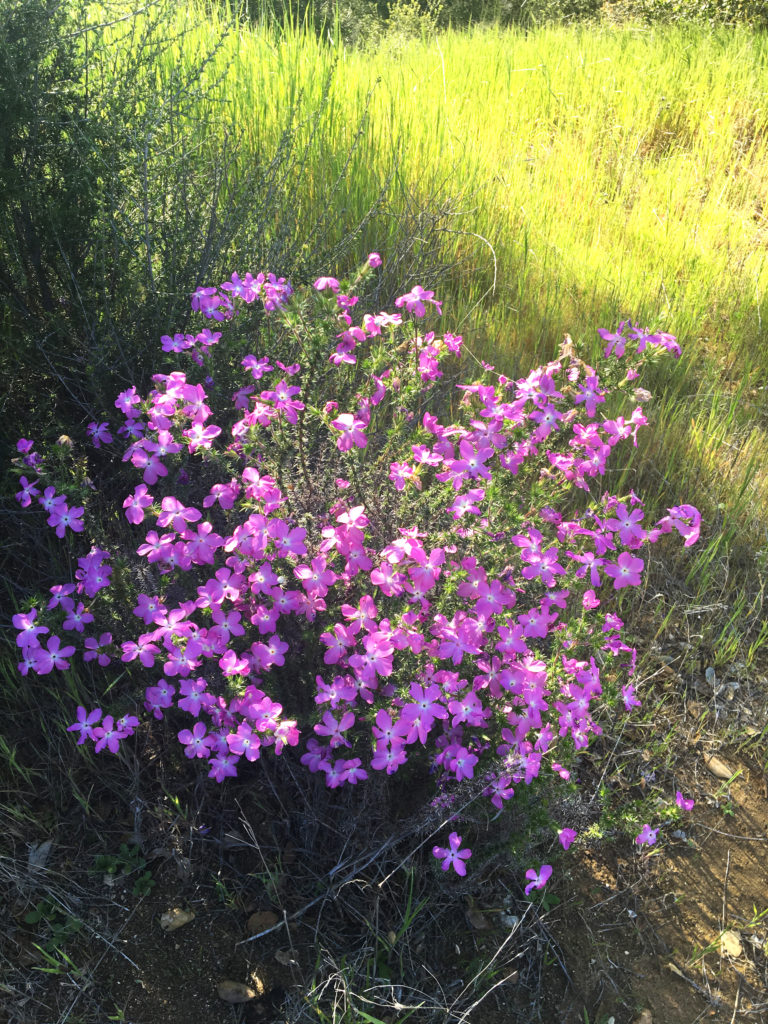 Hey, what’s that in there? Enhance: 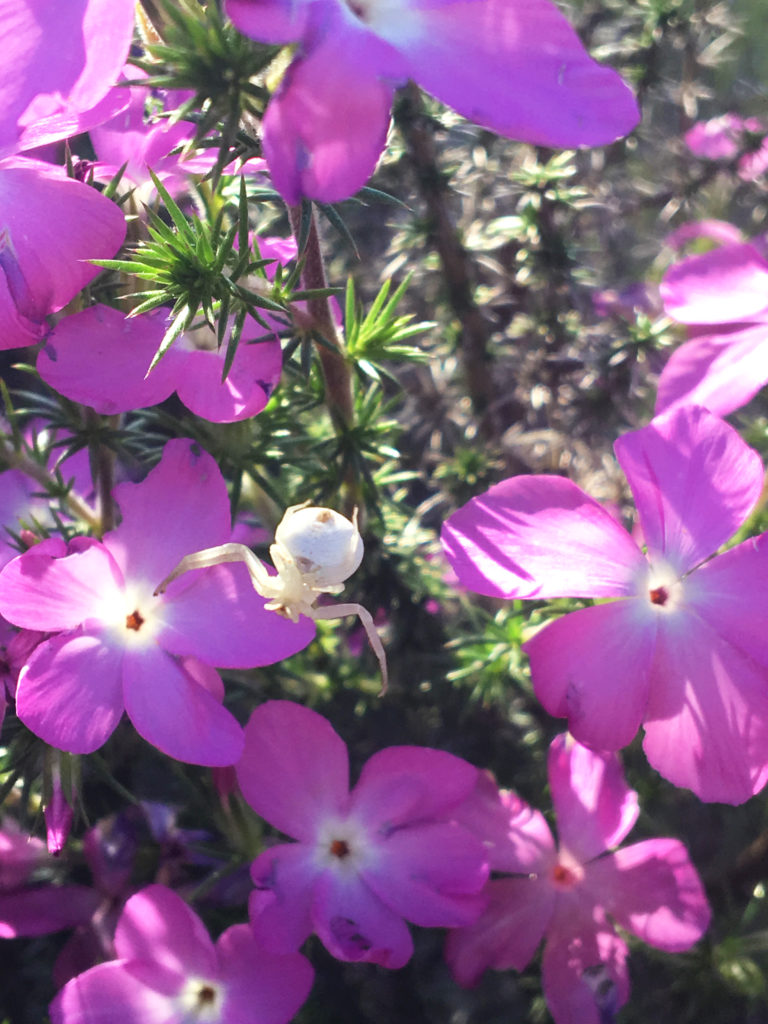 A pretty cool white spider, which sorta looks like a cyclops skull with crab legs in this photo. It’s a golden-rod crab spider (misumena vatia), which is one of the most studied spiders in the world. It’s one of the few that can change its color depending on the hue of the flower it’s sitting on.

When we completed a major hillside, we looked across the landscape and saw something remarkable. An exquisite, pure-white temple in the distance. 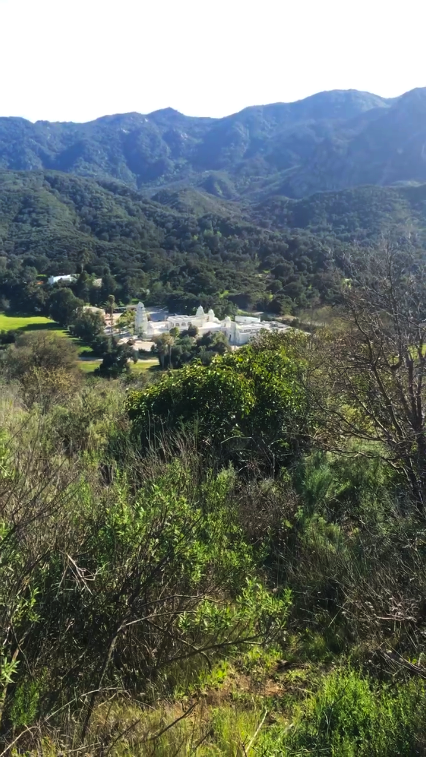 It looks much closer in this photo than it really was – there was a major slope and a long, rough trek between us and this thing. It wasn’t something we could actually walk to from here in any practical way. 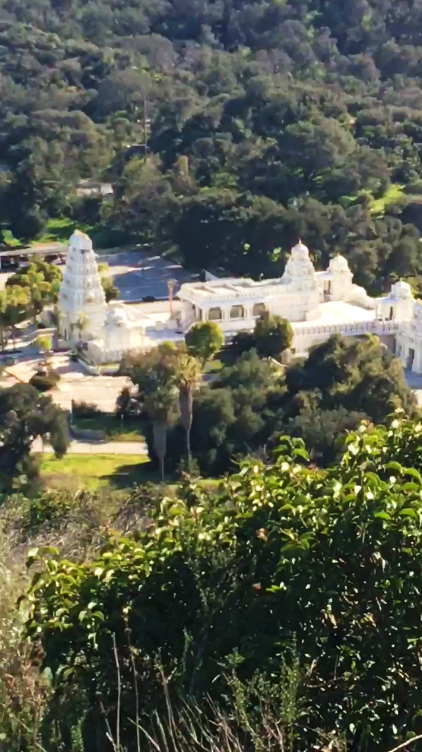 Besides, zooming in, there was a road leading up to it. So we could just drive there later. Alex theorized that this must be the Malibu Hindu Temple, which she had wanted to see anyway.

We continued hiking on the trail ahead of us, enjoying the surroundings and not worrying too much about being unsure of our exact location.

At one point the trail continued through a broken and opened up portion of a fence. 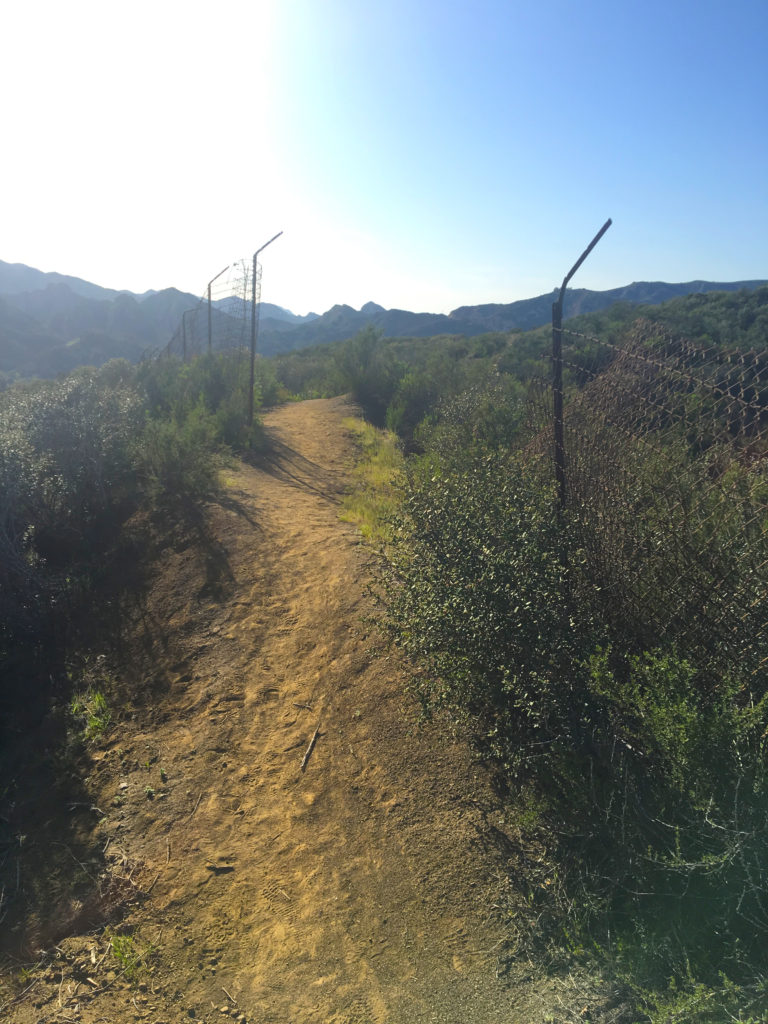 The trail was good here, so we felt relatively confident this was an okay thing to do, but it was still a little disconcerting.

I found a walking stick at some point. 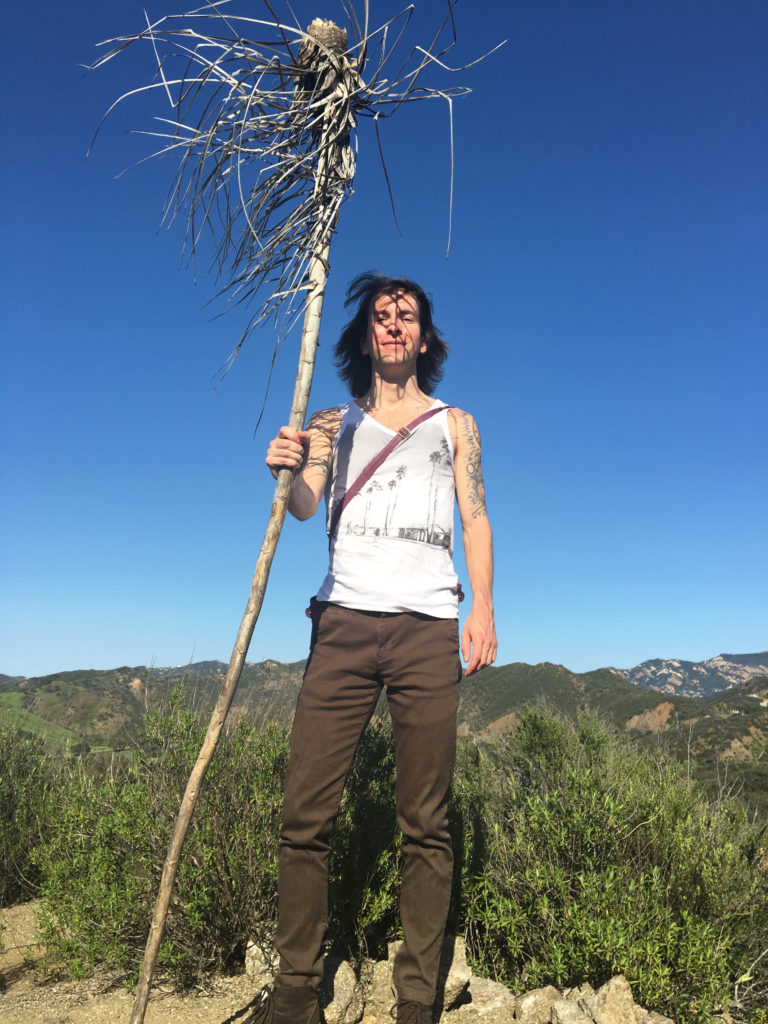 It had been a couple hours since the start of the hike and there wasn’t an end in sight. We took forks that seemed to lead back in the direction of the ranch. Finally, we came to one that seemed to lead down to a real road… but the trail itself to get there was the hardest by far. It was less of a walking trail and more of a thin, winding rainwater trail, which we had to inch down carefully at times.

This portion was certainly not for children, and probably wasn’t meant to be for us either. Whoops.

We did make it back to paved backroad, and saw some wild deer for our trouble. 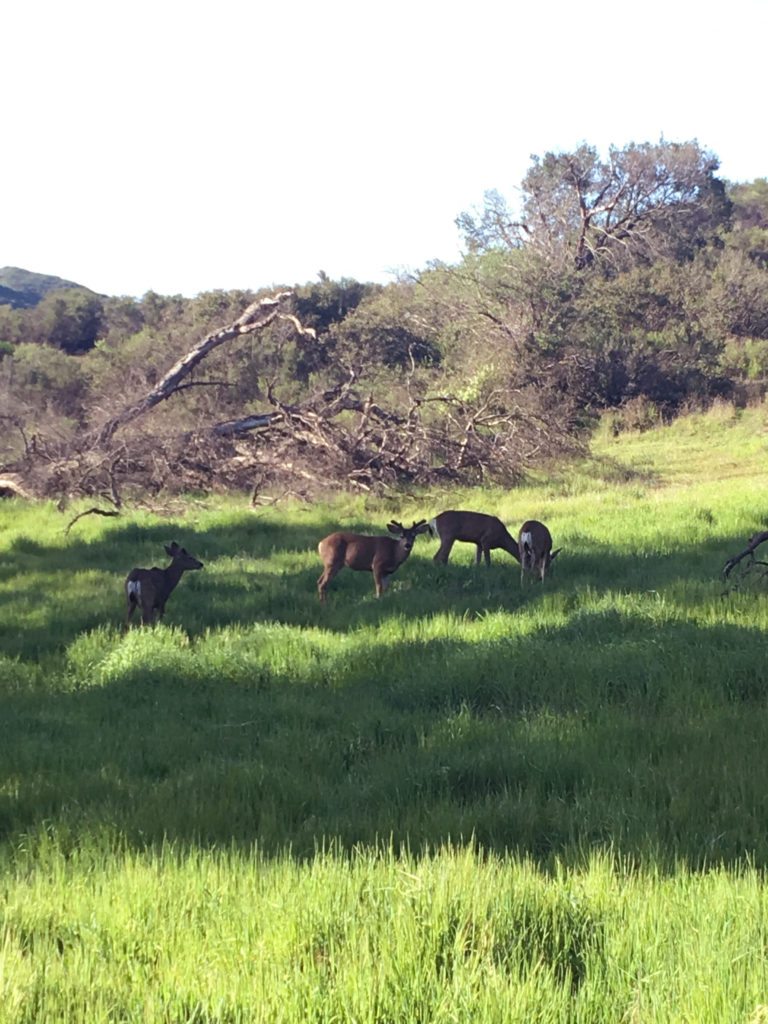 We emptied the rocks from our shoes and took a short break to rest our legs. It was a quick walk past the camp sessions and closed-off mansion back to Alex’s car, which was now the last one left in the lot.

Our location map showed that we might have went a little off-course. 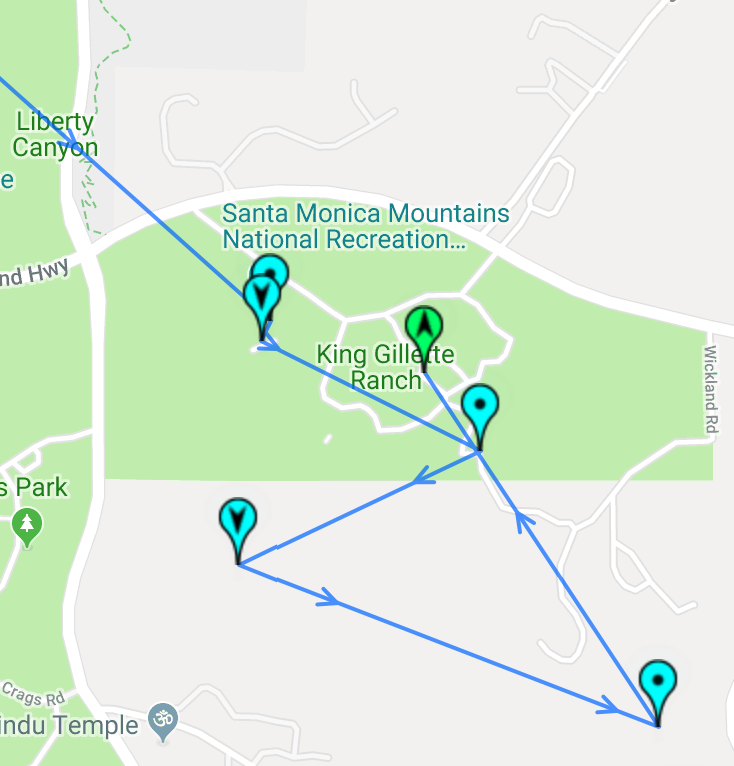 I failed to get a good photo of the temple entrance so here’s one from Wikipedia: 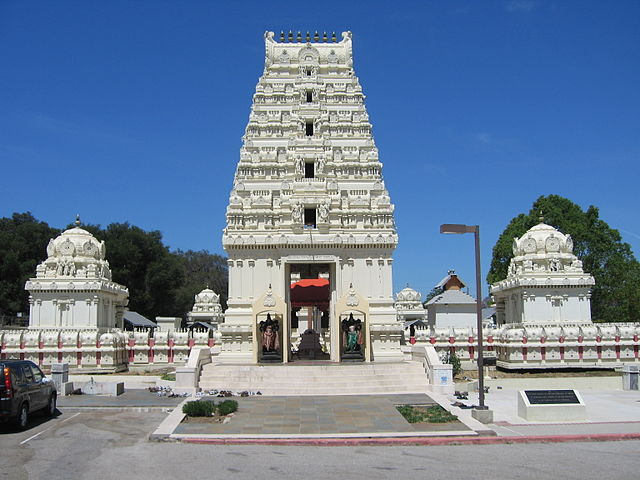 The Malibu Hindu Temple was built in 1981 in the traditional South Indian style, and is one of the biggest Hindu temples in the Western hemisphere. The temple was built by a guy named Vasan Srinivasan, who was a civil engineer in Los Angeles.

The upper temple is devoted to the Hindu god Venkateswara, who seems to have a lot of complicated stories but apparently is known for answering prayers and delivering the most improbable miracles. (Please correct me if this is wrong.)

The lower temple is devoted to Shiva, who is one of the three principal gods of Hinduism. Shiva is the destroyer and transformer who creates and changes the universe. There are shrines to other deities here and there too.

You may also recognize the temple from the movie Beverly Hills Ninja or when Britney Spears had her infant son blessed here in a media event. This is Los Angeles, after all. (I mean, it’s Calabasas, but close enough.)

Alex and I took off our shoes and entered. 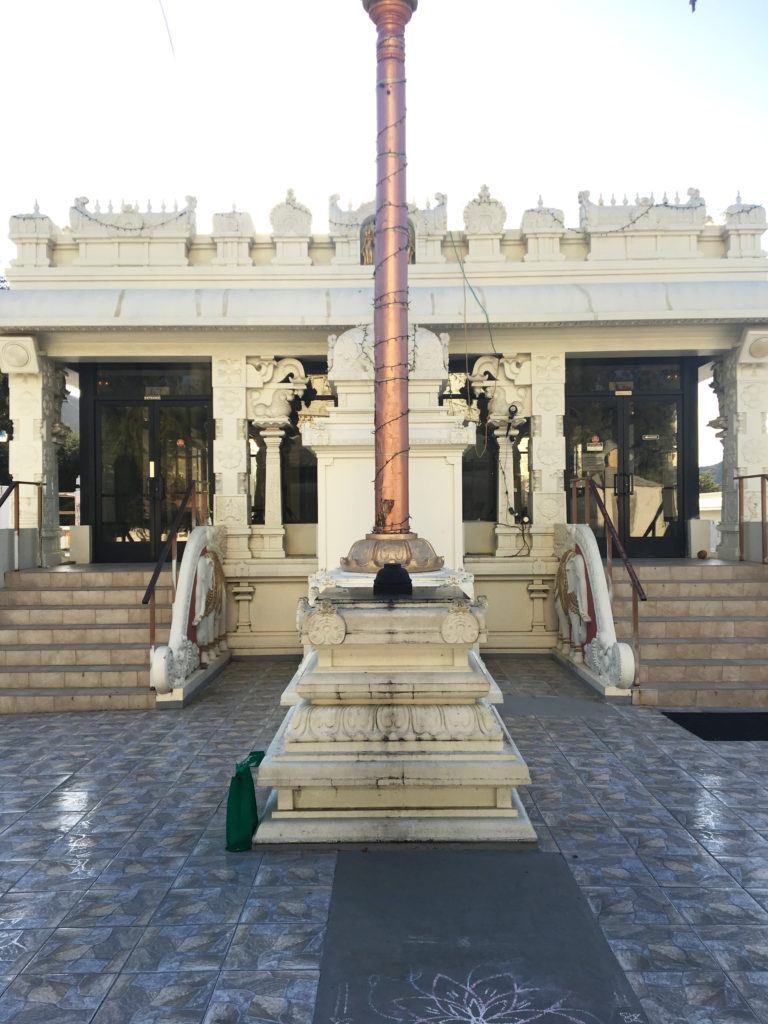 Words don’t really do justice for how elaborately embellished this temple was. I had never been to a Hindu temple before and I’ve never really experienced anything like this place. It was breathtaking. A wholly different experience than hiking. 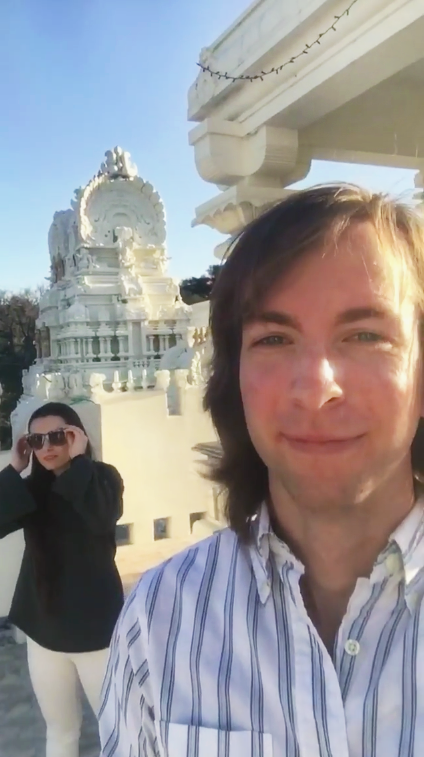 We explored the shrines on the upper story and observed a ceremony going on in the main building here for just a moment. We also went downstairs into the prayer room and saw the equally adorned shrines below. It was fantastic.

After we were satisfied, we drove to Calabasas, had dinner, and then went back home. We covered a lot of ground today and it was awesome from start to finish.