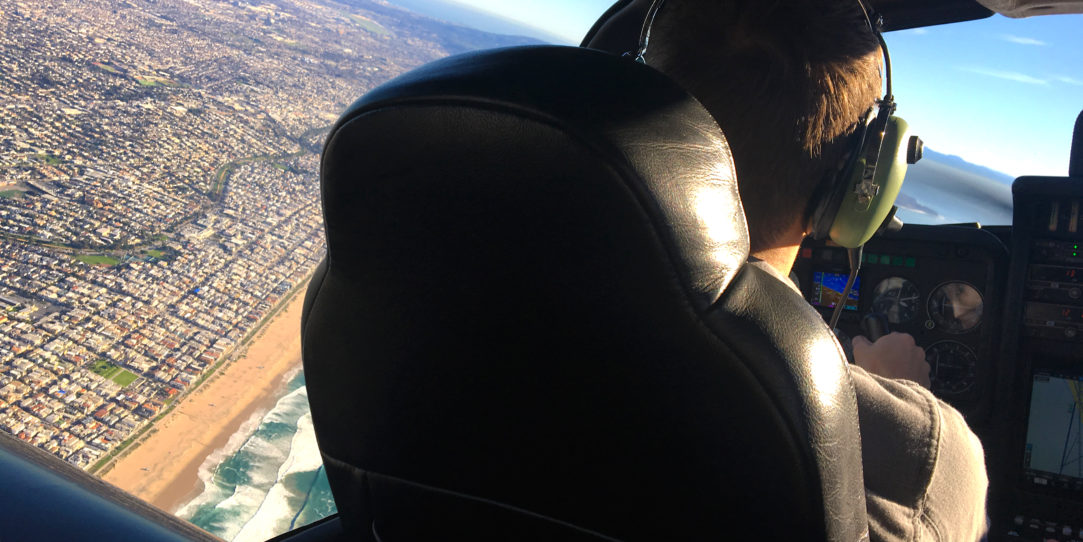 I have been in plenty of airplanes.

From trips around the world to trips that don’t even last an hour (even a propeller plane over the Aegean Sea!), I’m an experienced air traveler.

That’s the day when Alex and I went to Zamperini Field (KTOA) in Torrance, CA, and I hopped in a cockpit for the first time ever and flew a big circle over Los Angeles, Hollywood, Santa Monica, and everywhere in between.

This blog post is going to be mostly photos since I think they speak for themselves. I’ll point out landmarks but to me the coolest part is that I was the one personally flying over them.

Alex was in the back taking photos and enjoying the ride, and my co-pilot was an instructor from Zamperini Field who I obviously could not have done this without.

Here we are in front of the plane – a Socata Tobago TB-10. SOCATA is a French company and most of these TB-10s are in a more conventional white, but I have been told by other aviation enthusiasts that this one is “very sexy” in black. And, I mean, I don’t disagree.

The Socata Tobago TB-10 is a single-engine aircraft that flies with that big propellor you can see on the nose. The FAA registry number of this specific airplane is N93RS, and you can go on registry.faa.gov and look up this plane.

To be clear, I was not the one taking off (or landing) – that was the instructor co-pilot’s duty.

I love this frame from the video.

The first part of the trip was from Torrance to downtown Los Angeles – a neighborhood commonly abbreviated DTLA. If you’re not familiar with LA, you might expect downtown to be on the coast, but in reality DTLA is on the east side of the city and is a big outcropping of skyscrapers with some hills and mountains around.

Right away we spotted a blimp flying nearby!

Here I am piloting the plane. This was the first couple minutes I had control, and you can tell by my tight double grip there that I was a little nervous. In a way it was like the first time my dad ever let me drive a truck when I was 14.

But let me tell you, white-knuckling over our old long gravel driveway a few times was nothing compared to the first time I turned the plane. Because, of course, you don’t just turn a plane, you bank it. Which means you’re tilting the plane and your whole body to the left or the right.

I got used to it pretty quick, but man, those first couple times were exciting.

Here I am making a slight bank to get those DTLA skyscrapers in my sights.

Here we are coming up to City Hall – that big pointed white building. My dad used to work in one of those buildings next to it, too.

And check out these beautiful skyscrapers! With other parts of the city in the distance – like Westfield/Century City way back there, and the mountains reaching down to the Pacific coast. An absolutely gorgeous shot by Alex. (As they all are, of course.)

See the US Bank tower there, that really tall one around the middle? Just a week before this, I was up on the top floor, and even did the terrifying SkySlide – the transparent glass slide that circles around the outside of the building and takes you from the top floor to the floor beneath.

Who’d have guessed a week later I’d be even higher up, flying in the air around it?

Speaking of Alex, how’s she doing in the back?

We saw the baseball stadium… is this the Rose Bowl? I don’t know anything about baseball in LA, sorry.

(The flowery pattern is a reflection of Alex’s backpack.)

We also saw MacArthur Park, which is a really neat park that we had semi-recently walked around.

From downtown, we banked westward and ascended a little higher to go over the mountains.

And check out this great aerial view of the mountain trails, with the Valley all the way back behind!

I don’t really care that much about the Hollywood sign as a landmark, but I did enjoy this shot of it off the wing.

And here’s the Lake Hollywood Reservoir, where I’d later take my parents on vacation:

Here’s the Dolby Theater and other parts of Hollywood from above. Is that Hollywood High School?

Here’s my favorite video from the whole day – a full… well, not 360, but maybe a 270 degree view of the interior. Starting with a look out the windows to the north, the hills and mountains and trails, then my instructor co-pilot and me in the pilot’s seat, and then the windows to the south down to Hollywood.

I think this one gives you the best experience of being up in the plane, so if you only watch one, watch this one.

And by the way, we did not have any emergencies, so there was no need for Alex to kick out this glass.

We made it over Stone Canyon Reservoir, where I’ve hiked around too…

Then we got to the Pacific coast! You can see the border of the state of California right here, up the mountains, Highway 1 up to Malibu, and that beautiful beach on the ocean.

Here’s a video looking south to Torrance, towards Rolling Hills and Long Beach. Catalina Island is off in the distance there too, but honestly I just like watching how small the waves look from up here.

We even flew over LAX (Los Angeles International Airpot) which I was a little wary of, because I mean… there are other airplanes coming up and down here! We ascended higher and passed over some runways. I did not run into any other airplanes. Thanks air traffic control!

We came down lower again over the beach.

I’ve never been to Catalina Island but it’s high on my list. Actually, I could’ve chosen to fly over to Catalina and back on this trip instead of around LA, but I figured LA would be way cooler for a first flight. When I go to Catalina I actually want to go and explore on foot!

We begin our descent…

Right back at Zamperini Field where we began.

This is the path we took!

Well, it’s pretty close anyway – the above map shows a different flight but same plane and very very close. I got it from AirNav RadarBox.

I had to get a photo with my instructor co-pilot, although I have sadly forgotten his name – was it Cary? Sorry! I don’t remember.

And then I got a few “vanity shots” in the cockpit, since I did just fly the thing after all.

Not bad for the first time I’ve ever flown an airplane! This was a really cool opportunity and I’m still so thrilled I got to experience it – definitely one of the top experiences in my life that I refer back to a lot now. I mean how many people get to fly single engine aircraft over the whole of LA? I love being in the air.

Before making this post, I had forgotten the model of airplane I flew, so I posted on the r/flying subreddit to see if anyone could help. Turns out the aviation world is pretty small and not only could they all identify it down to the exact plane, but some of them had even flown it before! One person on there said they could see their own plane in the back of my photos. How crazy is that?

When I told my parents about my flight – AFTER the fact, so they wouldn’t worry! – my mom let me know that although it was my first time flying, it was not my first time in a cockpit after all.