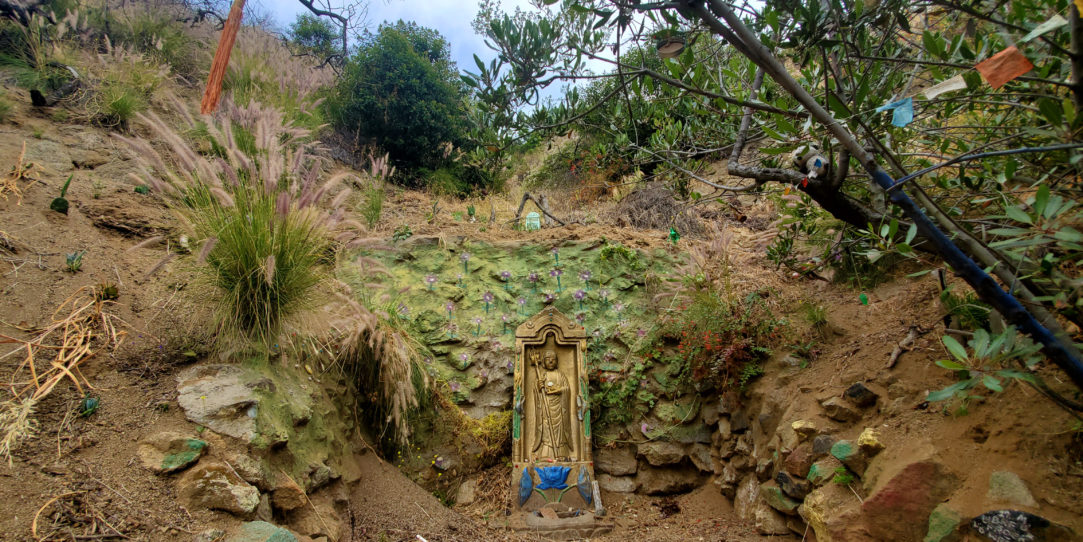 This is the story of how Alex and I wandered onto a trail we were not prepared for, navigated through brush, beehives, and bare rock, and discovered the most peaceful zen spot in Los Angeles that almost nobody knows about.

But first, an adorable wild animal.

I met Alex outside Wattles Mansion. It was a sunny day without being oppressively warm – June 16th, 2019.

Wattles Mansion is a historic site that was once known as Jualita. It dates back to the days when Hollywood was just a place for rich men from the east coast to visit and talk about silver screens. Named after Gurdon Wattles, a wealthy banker from Nebraska who poured a lot of money into both Hollywood and union busting, the mansion is the last remaining of its style in Los Angeles and was sold to the city in 1965. Now they use it for weddings, meetings, and films.

Due to a film, the mansion itself was closed – disappointing. But we did see this little guy:

He let us get real close, and just kept one wary little eye on us as he gathered bunches of grass in his mouth and little hands, and stole it back away into his burrow.

In and out, in and out. We could have watched him all day… but we decided not to.

Behind the spacious mansion is a very cute little park. It’s got arches and big wide steps and a whole nice area for dogs and frisbees. There were a number of people taking advantage of this.

We didn’t take any photos here, but it was a nice area that you can see in detail here.

Although the walkway around the garden stopped, there was a dirt trail that kept going further towards the mountains. Naturally, we pushed on.

After a short walk, we stumbled upon quite a sight: an entryway into another world.

Now this was unexpected. To say the least. What on earth…?

Stepping inside, it was like an abandoned wonderland, a decades-old paradise now in disrepair.

It was a wide open space and we were the only ones there. Naturally, we started exploring, hiking up the small switchbacks on the right.

There was no shortage of dilapidated magical spots.

I later learned that ol’ Gurdon Wattles fell in love with Japanese architecture, and met a landscaper on his world travels that he retained for decades. He’d buy lanterns, tea houses, shrines, anything he could get. Some of these plants were brought directly from Japan.

This area was also apparently popular with the punk crowds of the 1980s, and I would guess that there were some hippies here in the decades before that. There were a lot of “works of art” that gave the space a special charm.

There was a wide, easy trail that winded further towards the mountains, but there was a small side trail that meandered up to the side. We chose that one first.

Following that trail is where we found the secret of Wattles Garden: the most peaceful shrine I’ve ever visited.

The Shrine of Wattles Garden

Coming around the bend, at first you just see the Japanese gateway – which is actually known as a torii. Red toriis are supposed to protect against evil, and all toriis are said to mark the passage from the mundane to the magical.

I didn’t know that at the time, but I could feel it in the air anyway. Soon I could see the full shrine.

It’s funny, because in person, I remember it being much taller, the staircase stretching on for much longer. I also remember not being able to see the shrine as well from below as these photos imply. Perhaps it was the magic of being there in person that a photo can’t replicate.

Ascending the steps felt electric. The shrine at the top came into view.

I was ahead of Alex, so it was at first just me approaching on my own. I called for her to come look when I was on the stairs, but by the time I reached the top I was frozen in awe.

This little alcove was so peaceful, so silent, so serene, it filled up the space around me and spoke to me in a way that few places ever do. The eternal nature, the timeless quality of the artifacts that had been waiting just for me… it was so much to take in for all of my senses, including a couple that don’t often get used.

I examined it, peered behind it, respectfully of course – looking, but never touching. Even that felt like I was being invasive somehow. This wasn’t just an object on display, no, this was a thing that seemed to be alive with nature flowing through it. It’s for that reason I didn’t take any photos closer to it, or behind; it seemed rude to do so.

After another moment of introspection, Alex joined me. We admired it together, and she felt the same about it as I did. I left first to let her have her own moment alone with the shrine.

I don’t believe in spirits or gods or magic, but if I did, this would be the first place I’d look for them.

After Alex and I regrouped, we found our way back to the main, wider trail at the bottom of the small valley and got on our way. We were greeted with a positive sign.

A note here: I don’t really know what this trail is called.

Google Maps shows it as a loop and calls it “Harper Monkey Trail,” but I haven’t found any references to that name anywhere else, and it’s not actually a loop.

Alltrails calls it “Wattles Garden Park Loop” but as far as we knew, we were off the grounds of Wattles Mansion, and again, it’s certainly not a loop. Users on Alltrails agree there, too, with one saying they “could not find the western part of the trail.” That’s because it doesn’t exist.

What we did realize rather quickly was that it was no easy hike.

Although the wide lens makes this look not too terribly challenging, in reality it was harder than it looks. (And don’t miss Alex at the top.)

Many parts of the trail required us to use our hands and knees. Neither of us had expected a hike like this, so she was in a dress and I was in a t-shirt and shorts, neither of us with any supplies. Heck, Alex was even wearing heels for this.

Ironically I had just bought some new hiking pants, and a small bag that I had stocked and ready for adventures like this.

They were sitting right next to my good hiking boots, in my closet, at home.

That’s a look back at the trail, with Los Angeles, specifically West Hollywood, just a couple miles back.

You might also notice that the formerly wide trail has suddenly gotten very, very narrow.

One foot in front of the other, uneven footing, steep rocky inclines, and brush that cut across the path, thorns occasionally leaving lines across our bare legs.

The ground treacherous, the sides closing in on us, and soon trees were even crowding us from above, all at once.

We’d see bees buzzing around the flowers that jutted out into the path, and we’d be careful to walk slowly, disturbing them as gently as possible, trying not to at all.

It wasn’t just the bees we could see that worried us. It was the bees that we could hear.

Surrounding us on all sides was a constant, rumbling buzz, in stereo cranked all the way up. To be that loud, to inundate us with the noise from all sides, there had to have been thousands of bees amidst the flowers.

And if we angered one bee, and it was able to summon its hive… and with the amount of exposed skin we had, and heck, my t-shirt was skin tight, it wouldn’t have stopped a stinger for a second…

We knew we had to inch forward even when we were climbing or crawling, for miles, taking extreme pains not to anger the swarms of insects lurking just out of sight.

This is why I tell people this hike is not for the faint of heart.

Eventually the air became clearer, though, and looking back began to reveal more and more of Los Angeles, until we could see the city beyond the valley’s edge. I have to say, it looks much closer in the above photo than it actually was.

But hey – we did it. We didn’t even know what was ahead – the trail line on Google Maps had abandoned us a mile back, completely inaccurate – but even pushing ahead blind, we just assumed it would turn around or join up with something eventually.

At least we sure hoped so. We really didn’t want to make that same dangerous trek in reverse.

The trail had been level for a while, but near the end it got steeper than ever, sometimes just leading us to veritable walls of rock that we’d have to scale.

It turns out that the hardest part was right before the end. We could see a stretch of Runyon Canyon Trail ahead of us, and Wattles Garden Trail / Harper Monkey Trail faded away into steep rock and brush. The final stretch was barely a trail at all.

We stumbled onto Runyon Trail exhausted, and passers by gave us odd looks – to them it must’ve seemed like we just climbed up the side of the mountain with no trail at all. It was impossible to tell where the trail was from this side – you’d have no way of knowing from up here.

It was a nice view from Runyon at the top. We finished Runyon off as usual and had a lovely trip back down to the city.